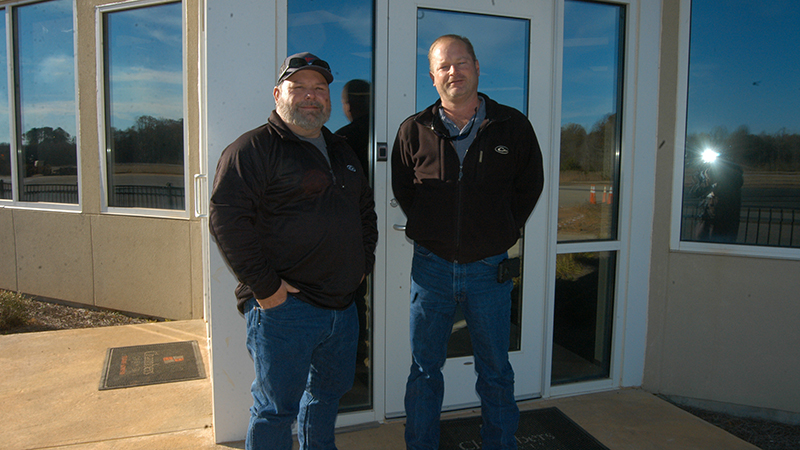 Talking about the airport: City of Lanett Utilities Superintendent Tony Chandler and Interim Airport Manager Jody Lowery (above) have been taking lots of visits to the Lanett airport and talking a lot about its new runway. The construction work involved in building a new 5,400-foot runway is just about complete.

LANETT — The construction phase for a new 5,400-foot runway at the Lanett airport is nearing completion.

The asphalt paving for the runway and the nearby taxiway is complete. All that’s left is the grooving of the runway, the striping and the installation of lights, which could be finished up in January.

The new runway could possibly start landing planes around the first of February.

Ryan Pearce, a civil engineer who has worked on the project for several years now, said that Lanett has a really nice runway they can build an airport around.

Building an airport around a runway involves having the kind of facilities that go with a regional airport. A major step in that includes a first-class terminal. Last year a $1 million facility opened with offices for the Chambers County Development Authority (CCDA), a large conference room, a pilot’s lounger and a flight planning room.

The city is now looking to hire its first full-time airport manager. Those duties have previously been handled on a part-time basis by a city employee whose job description included work in other departments. The new manager will be a full-time professional who will handle such details of inspecting aviation fuel on a daily basis, seeing that the runway is free from any debris and negotiating leases for hangar space.

Another important step that’s been taken is the preparation of a nine-acre site just outside the terminal for hangar space. A hill on that site was leveled to ground level. The dirt that was removed was needed in the building of a 1,000-foot runway extension and a 2,500-foot taxiway. The project also involved bringing in an estimated 80,000 truckloads of sand from a quarry in LaGrange.

The construction of the 1,000-foot expansion was not an easy task. Much of the land was a swampy area where Osanippa and the Little Osanippa creeks merge. Culverts had to be built underneath the runway area to take care of some of the water flows, and a diversion channel was built around the southwest side of the new runway to handle more of the water flow.

Utilities Superintendent Tony Chandler said what’s there now is vastly different from what was at the old airport when it closed for construction in late 2017.

“Every day, it becomes harder and harder to remember what it looked like at the old 3,165-foot runway,” he said. “The old runway was really cracked up, and there were woods close by.”

Jody Lowery has been the acting airport manager for the city and has had many conversations with people who are interested in leasing hangar space at the airport. He said that somewhere between 15 and 20 people have expressed interest.

In most cases, the city leases space to an individual or corporation who builds the hangar and maintains it. According to Federal Aviation Administration (FAA) rules, the lease is for 30 years. At the end of the lease, the city owns whatever is on the site.

“Some hangars will be built for single aircraft, and some will house more than one plane,” Lowery said. “A hangar that’s 80 feet wide and 80 feet long can house two planes.”

The FAA offers incentives to airports that have planes based there.

Hangar space for the old airport is still on site and is usable.

“There were 13 planes and a helicopter there when we closed the airport,” Lowery said.

It’s fair to say that if you have a new runway that’s more than a mile long, people will come if you have hangar space.

It could take a $2 million investment on the part of the city to expedite the process. This would get the hangars going up. The income from the leases would easily cover the payback of a loan.

There’s also a need to have a jet fuel truck. For jets to land at an airport, they usually need to refuel before taking off again. Some business class jets can hold between 1,500 and 3,000 gallons.

The city stands to gain some significant revenue from leasing hangar space and the sale of aviation fuel.

An environmental impact study is now under way for a new road that could be built to the airport. It would offer better access to Exit 77 on I-85.

A three-member council committee has been tasked with coming up with a job description for the new airport manager. They will be making a recommendation to the full council.