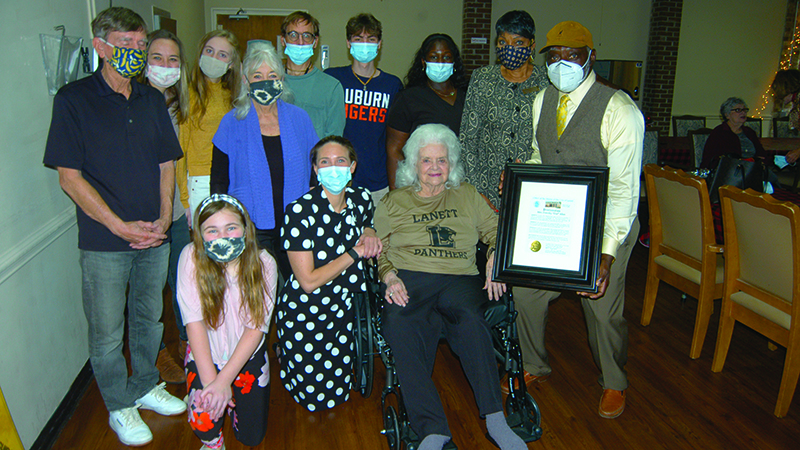 LANETT — Dot Allen got her birthday wish on Monday. She celebrated her special day with family members, friends, city officials and the staff of Diversicare of Lanett, where she is presently residing. Still young at heart, when she saw the numbers 99 on her birthday cake she joked that the numbers had been put there upside down, that they should be 66.

Allen had asked for a Lanett Panthers t-shirt. She got one and proudly wore it at her birthday party. She was a cheerleader at Lanett High in 1939 and is proud of a photo of her that’s in the Lanala for that school year.

Family members making it to the 2 p.m. EST party at Diversicare included Allen’s daughter and son-in-law, d’Gail and Rick Rush of Huntsville, granddaughter Michelle Keel and her daughters, Violet and Ella, all of Birmingham; grandson Eric Rush and his son, Bala, of Gainesville, Florida.

Mayor Jamie Heard and Lanett Senior Center Director Sandra Thornton were there representing the city. Mayor Heard presented Allen a large, framed proclamation, honoring her on her birthday. It reads:

“Whereas, Dorothy “Dot” Higginbotham Allen was born on December 27, 1922, in a residential house in LaGrange, Georgia. She moved to Lanett, Alabama and attended the original Lanett High School where she was a cheerleader. She graduated from Lanett High in 1939 at the age of 16.

“After she graduated she worked at the offices of Callaway Mills for several years and was later employed in the offices of West Point Manufacturing Company. She was a member of the Little Theater and starred in many plays.

“In 1964 she married Ralph Allen, and they lived happily together for 18 years until Ralph passed away in 1983. During this time they owned several businesses and were very active in the Lanett community. She has a daughter named d’Gail Rush, who graduated from Lanett High School in 1965 and was Miss Chatt in 1968.”

“Be it resolved that the Mayor and Lanett City Council hereby expresses congratulations on this 99th birthday to Mrs. Dot Allen, who will be celebrating her 99th year in the Lanett community on Monday, December 27.”

The proclamation was signed by Mayor Heard and attested by City Clerk/Treasurer Deborah Gilbert.