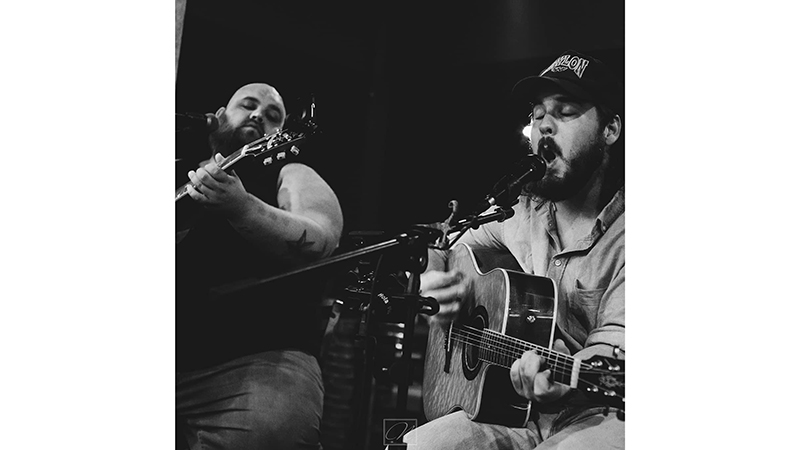 In concert: Above, Junior Cardiel, left, and Clay Amason, right, perform at an event. Photo contributed.

For those 21 and older looking to have some New Year’s Eve fun, Circle W Bar and Grill in Valley will be hosting a New Year’s Eve party featuring local country music artists Junior Cardiel and Clay Amason. Admission will cost $5, and guests will need to bring IDs proving their age, as alcoholic beverages will be available for purchase. The party will last from 10 p.m. on Friday to 2 a.m. on Saturday.

Fly Workman, owner of Circle W Bar and Grill, said the party is scheduled for 10 p.m. so guests will be able to watch a Georgia football game beforehand.

“I don’t want people to miss out on that and not come because of the ball game,” he said.

Originally, rock band Poison Whiskey was scheduled to play at the party, but Workman said they canceled.

Cardiel said he plays music by artists such as Christopher Stapleton, as well as soul and southern rock and some old country music. Meanwhile, he said Amason tends to play old-style country music such as covers of Waylon Jennings and George Jones songs.

“We’re separate artists, but we do a lot of shows together,” Cardiel said.

Cardiel said he’s been playing music for about five years, whereas he and Amason have been playing together for about two. In their performances together, they sometimes take turns playing independently and sometimes play together.

Amason said he’s been performing for about seven to eight years.

“We still do individual stuff, but for the most part we try to share, you know… it’s easier to play a four-hour set with an extra pair of hands,” Amason said.

Cardiel and Amason have played at Circle W Bar and Grill before.

Some of Cardiel’s most requested songs are “Tennessee Whiskey” and “Aint’ No Sunshine.”

“We have a third person most of the time, and her name is Shelby Belcher,” Cardiel said. “She’s not able to make this show for New Year’s. And, you know, she’s a phenomenal singer, as well.”

Amason said he and Cardiel will improvise which songs they play, as they usually do. There are a handful of songs they tend to play at every gig.

“If they’re into [a song] and want to be dancing and getting rowdy, then we’ll carry on with the upbeat stuff,” Amason said. “Or if it slows down some, we might branch off and play some more slow songs.”

Amason said he’s looking forward to playing music and having a good time.

“It’s really a fun time when you have a big crowd and folks are into it,” he said. “You get to have a good time. You get to cut loose, play good songs, maybe even touch somebody’s emotional side. You never know what somebody’s going through.”