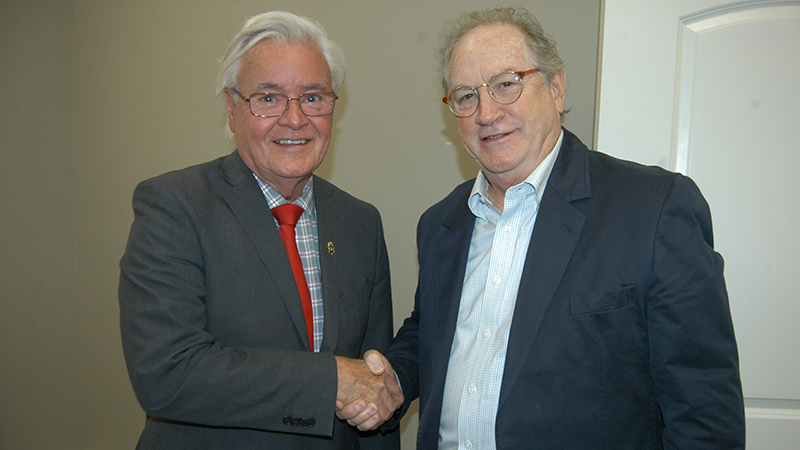 One D.A. to another — Former 5th Judicial Circuit District Attorney Rea Clark (at right) congratulates Ken Davis of Phenix City (left) on his long tenure as the district attorney for Russell County. Davis is now in his 44th year of service. He won’t seek re-election next year and will be retiring from the office. Davis grew up in Phenix City and can remember when Albert Patterson was killed in the summer of 1954, an event that led to the declaration of martial law and the cleanup of the town.

VALLEY — The longest-serving district attorney in the state of Alabama was Thursday’s noon-hour speaker for the West Point Rotary Club, which took place in the conference room at the Greater Valley Area Chamber of Commerce.

Ken Davis will retire next year after 44 years in the Russell County district attorney’s office. He has been in the office since 1978, the first four as an assistant D.A. He’s been the county’s district attorney since 1983.

Davis was born in Columbus in 1946 and grew up across the river in Phenix City.

“The reason I was born in Columbus is because Phenix City didn’t have a hospital back then,” he said.

Davis has many childhood memories of the time some people were calling his hometown “the most evil city in the United States.”

Prostitution and gambling were widespread in Phenix City during the World War II years when thousands of young men were in the U.S. Army at nearby Fort Benning. Lots of money was changing hands in Phenix City at that time and continued in the post-war years.

“It was said that a southern mob ran the town,” Davis said of a possible organized crime connection, “but I don’t know if that was true.”

Davis walked to Central Elementary School in his youth. He remembers a big house he would pass along the way. It was a pretty wild place, but young Davis had no idea what was going on there at the time. He later learned that it was Ma Beachie’s place. Beachie was locally famous as a madam and ran a lively business at the time. She played a minor role in “The Phenix City Story,” a 1955 movie filmed in Phenix City and starring John McIntyre and Richard Kiley.

Davis said there’s one scene in the movie where his family home can be seen in the background.

Playing slot machines was an accepted way of life in the Phenix City of the 1950s. Davis said he could remember his mother and grandfather picking him up one day and the grandfather giving him a handful of nickels to feed into a slot machine.

Later on, his dad would take him to the west bank of the Chattahoochee where they could see slot machines being thrown into the river by National Guardsmen when the city was under martial law.

He can remember when Albert Patterson was murdered, an event that led directly to the cleanup of the town.

He said that Patterson was an impressive kind of guy. He had been a lieutenant in World War I and was awarded a Croix de Guerre by the French government after being seriously wounded in the war. For the rest of his life, he would wear a specially made shoe on one foot because of his war wound.

Over the years, many people have believed that Patterson was killed by the mob. Davis said that people in the know don’t believe that to be true.

What’s known for sure is that he vowed to clean up corruption in Phenix City when he ran for the office of Alabama attorney general. He was gunned down outside his Phenix City law office on June 18, 1954, only days after having won the primary election for that office.

A man named Arch Ferrell was indicted in the case and tried in Birmingham. He was acquitted for lack of evidence but later served time in jail for vote fraud.

“Did he commit the murder?” Davis asked. “I don’t know, and I don’t think there’s anyone alive today who would know either.”

Davis was moved by the movie “To Kill a Mockingbird” and was inspired to become a lawyer by Gregory Peck’s Academy Award-winning performance as Atticus Finch, an Alabama attorney who chose to do what was right over what was politically convenient.

Davis attended Auburn University in the 1960s and was drafted into military service in 1967. He later finished his undergraduate degree and earned a law degree at the Cumberland School of Law in Birmingham. He returned to Phenix City, got married and started practicing law.

A prosecutor, said Davis, is a very powerful person.

“He has more control over someone’s life, liberty and reputation than any other person,” he said.

Davis said that one of the truest statements about being a district attorney is in the 1993 movie “Philadelphia” starring Tom Hanks and Denzel Washington.

In the movie, Hanks played the role of Andrew Beckett, a young attorney who was attempting to hide the fact he was gay and HIV positive. He was eventually found out and fired. He wanted to sue the law firm for discrimination but had trouble finding anyone who would represent him. A young African-American attorney named Joe Miller (Washington) stepped up to take on that task.

In one climactic scene, Beckett is called to the stand and asked what he liked about the law.

“Sometimes I get to be a part of justice being done,” he said.

“If you are doing your job as a district attorney you get to do that every day,” Davis said.

There are times when a DA has to be measured in their approach to the law and avoid prosecutorial zeal.

“A victim can be passionate and persuade you to do something that can get you out of office,” he said.

To illustrate that point, Davis pointed to a more recent case involving gambling. A man came to him wanting to open a local bingo hall. Davis told him it wasn’t allowed, and the man countered by saying that some local civic groups, such as the Elks and the Moose Club, were having bingo at their lodges.

This prompted Davis to give the lodges 90 days to close this down, and the controversy put Davis in a tough fight for reelection.

He went on to win that fight and has been Russell County’s district attorney ever since.

Davis said that one of the most difficult parts of the job is to tell people they can’t prosecute a case because of a lack of evidence. They are convinced they know who the guilty parties are, and sometimes the DA may agree with them, but it all comes down to how strong the evidence is and whether or not it can carry the day in the courtroom.