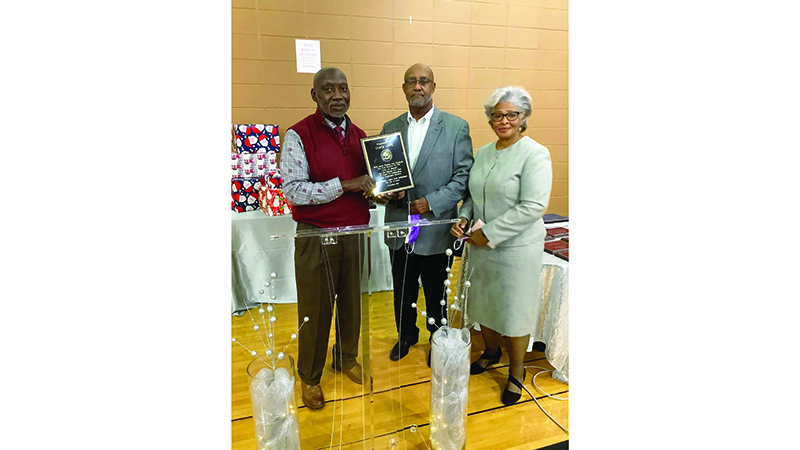 Retired: Curtis Lewis (at center) is shown with Lanett Mayor Jamie Heard (at left) and wife Patsy. Heard presented Lewis with a plaque thanking him for his years of service. Photo by Wayne Clark.

LANETT — Curtis Lewis is retiring after 13 years with the Lanett Recreation Department. New Year’s Eve 2021 will be his final day as a full-time city employee.

Lewis grew up in Lanett and has lived his whole life there except for the two years he was working on his B.S. degree at Jacksonville State University. He spent his first two years at Southern Union.

He worked in the local textile industry for 32 years, specializing in human resources and safety. He started out at the Lanett Bleachery & Dye Works and was Lanier-Carter Mill when it closed in 2008. At that time the company was known as WestPoint Home. In between those two stops he was at Opelika Finishing.

Between 1988 and 2000, Lewis served three terms as a city councilman in Lanett. Two weeks ago, on Dec. 15, he reached his 13th anniversary as a city employee.

“I’ve loved working with the recreation department,” he said. “It gives you a chance to be around young people and follow them as they grow into outstanding adults. It’s a situation where more of them remember me than I remember them. I’m always coming across young adults you say, ‘Hey, coach! How ya doin’?’ to me. It always makes me feel good to hear that.”

Lewis’ wife Patsy is retired from the Opelika City School System. They have two grown children, Jamal, who now lives in Suwanee, Georgia, and Burgundy Brasfield, who lives in Maryland.

Jamal and his wife Melanie have a one-year-old daughter, Olivia Jewel Lewis. Burgundy is married to Quinton Brasfield, a former classmate of hers at Lanett High.

Lewis likes that he will have more time to spend with his wife and granddaughter. He’d also like to keep working part-time with the city.

McCants is in his first year as recreation director.

Lewis graduated from Lanett High in 1973. His high school years took place during the transition from segregated schools to an integrated one.

“From the first grade through the eighth grade I went to school at Lanier,” he said. “Some men at that school, people like L.B. Sykes, Coach James Hardy and James Franklin, were lifelong role models for me. It’s been a good ride to get to this point in life. I’ve really been blessed. I really enjoyed working with people like Selbie Bradley and Ronnie Tucker.”

Bradley retired this past August after having had worked for the Lanett Recreation Department for many years. He was the brother of the late Shirley Motley, who was a city clerk and council member for most of her adult life.

The men of the recreation department take care of a lot of details many people take for granted. They are the ones who line off the field for Lanett High home football games.

“You always want to give your best effort for the city,” he said. “It takes time, but it’s something you put a lot of pride in. The first thing people will notice when they go to a football game is what the field looks like. You want to make a good first impression for the school and the city.”