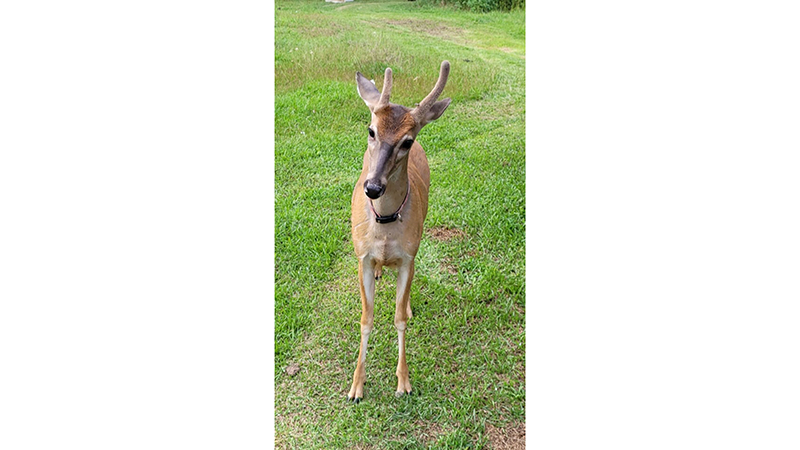 Relocated: Waffles the deer, who captured the attention of Chambers County, has been relocated to state-owned land.

A rehabilitated deer named Waffles has been displaced from his forest home in Huguley. Wildlife rehabilitator Beth Phillips Wilson, who raised him, fears that he may get hurt and requests that anyone who sees him call her at (706) 518-4174 or message her over Facebook.

The two-and-a-half-year-old deer has antlers and wears an orange breakaway collar.

Wilson said Waffles was spotted Wednesday morning in the Todd Addition area in Valley. She and Waffles live on 200 acres of land on Phillips Road in Huguley.

“I was in Orlando for the whole week last week and had people coming to take care of my animals,” she said. “And someone in a gold Lincoln Navigator picked him up, like, deernapped him.”

Wilson said that for whatever reason, perhaps because he was acting wild in their car, the deernapper(s) released Waffles in another location.

“He ended up in West Shawmut and then now over in Todd Addition, and he’s just trying to find his way back to Huguley where he lives,” she said.

Wilson emphasized that Waffles is not a pet — he simply lives freely on her property. Now that he’s been displaced in a neighborhood, Wilson said he may unintentionally scare people or be hit by a car. While Waffles knows how to forage and survive on his own, Wilson said a highly developed area like the neighborhood he was spotted in simply isn’t a good place for a deer.

“It’s illegal to have a wild animal as a pet,” she said. “The end game is for him to land back into the woods, the 200 acres here. He’s about the fourth deer I’ve had in the last five years.”

Waffles’ orange collar lets people know he’s somewhat domesticated. This can prevent people from thinking he’s rabid if he walks up to them as well as protect him from hunters.

Wilson said Waffles’ mother was hit by a car soon after his birth and that he was discovered by a tow truck driver.

She said she’s been rehabilitating animals for about 35 years. She said she’s always had a love for animals, and because she lives in the woods, she is surrounded by them. She believes she got her love of animals from her father.

“We would take care of helping animals that we saw, and it just got to where the older I got, the more my name got out, and people know that’s what I do,” she said.