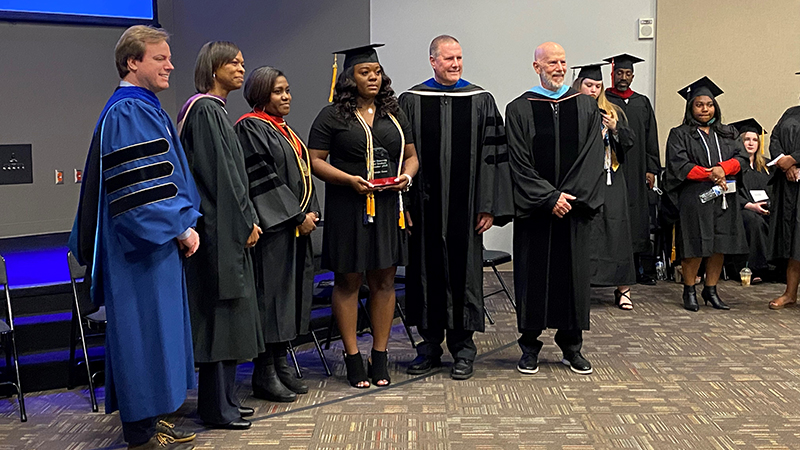 WEST POINT — Point University graduated 98 students with associate, bachelor’s and master’s degrees during a graduation ceremony held Saturday at Church of the Highlands in Auburn, according to a news release from the university.

Rob Parker, president of the Town at Trilith, served as commencement speaker. In his message, Parker encouraged the graduates to learn the difference between success and significance. Acknowledging that many of the graduates are still determining the next steps in their careers, he said it doesn’t matter what they do in life, as God can still use them, and their lives can have “remarkable significance.”

“I think we confuse what we do with who we are,” Parker said, noting that people often introduce themselves by their job roles. “You are defined by your relationship with Christ, how you treat people, the things that you value.”

Parker told the graduates they’d all be remembered for something.

The ceremony was also notable for the awarding of the university’s first bachelor of social work degree, earned by Enialju Evans of Covington, Georgia.

Each year, the university recognizes an outstanding graduate from both the residential and online programs with the Hathcock Award, the highest honor given to a graduating Point student. Named for the university’s founder, the award is given based on academic achievement, character, and servant leadership.  This fall’s Hathcock Award recipients are SarahAnn Southerland of Valley and Edelina Lane of Ellenwood, Georgia.

Family and friends of graduates who were unable to attend in person may access the recorded commencement ceremony on the Point University’s YouTube and Facebook pages; visit point.edu/commencement for more details.