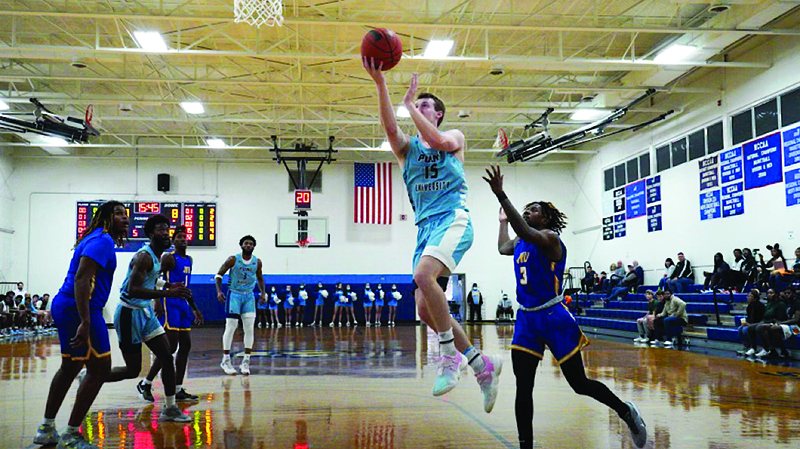 Laying it in: Senior G Ray Reeves of Calhoun, Georgia goes up for a layup during Points 77-66 victory over Milligan. Photo contributed.

Lorenzo Freeman Jr. and Ray Reeves combined for eight three-pointers in the second half to help send the Point University men’s basketball team to a 77-66 victory over Milligan University Saturday afternoon inside Steve Lacy Fieldhouse.

With the victory, Point advances to 8-6 overall and 4-4 in Appalachian Athletic Conference play, and the Buffs fall to 0-10 (0-8 AAC).

Freeman led all scorers with 24 points and recorded eight boards. Reeves followed with 22 points going 5-for-7 from perimeter shooting, and Gentrell Taylor had 15 points and seven rebounds. Jake Smith recorded 10 rebounds and eight assists and Jack Gray scored seven points off the bench.

Both teams connected for 26 shots from the field, with Point capitalizing on 10 3-pointers, compared to Milligan’s four.

It was a slow first half, as Freeman scored the first basket of the game in the opening minute of action, and the next basket was scored three minutes later, off a layup from Reeves. Reeves would follow with his first triple of the night, forcing the Buffs to take a timeout with Point leading 7-2. Out of the break, Milligan would tie the game at seven and take its first lead of the night off a layup from Levontae Knox. An old-fashioned 3-pointer from Corey Bowen would help the Skyhawks retake the lead 12-10, but Knox would connect for back-to-back layups to put Milligan ahead 14-12. Milligan would hold the lead for the remainder of the half, going ahead by 10 with 1:47 remaining. Reeves connected for a triple to cut Milligan’s lead back down to five with nearly a minute left. Milligan led at the half 31-26.

Out of the break, Point would open with a 9-4 run and tie the game at 35. The Buffaloes would retake the lead by three before Freeman would connect for a triple, followed by a layup from Taylor to put Point ahead by two. Milligan’s Trevor Hensley would answer with a triple to give Milligan a one-point advantage and Adam Graham would follow with a layup, but Freeman and Reeves would connect for back-to-back three-pointers to put Point ahead 46-45. With 8:42 remaining in the contest, Knox would connect for a layup to retake the lead for Milligan, but a layup from Taylor followed by triples from Freeman and Reeves would put Point ahead 56-49 and the Buffaloes were unable to recover.

Point will return to action on Thursday, Dec. 30, as they travel to face NCAA Division I opponent Stetson in DeLand, Fla. Game time is scheduled for 3 p.m.

AHSAA reclassification moves Valley back to Class 5A for…