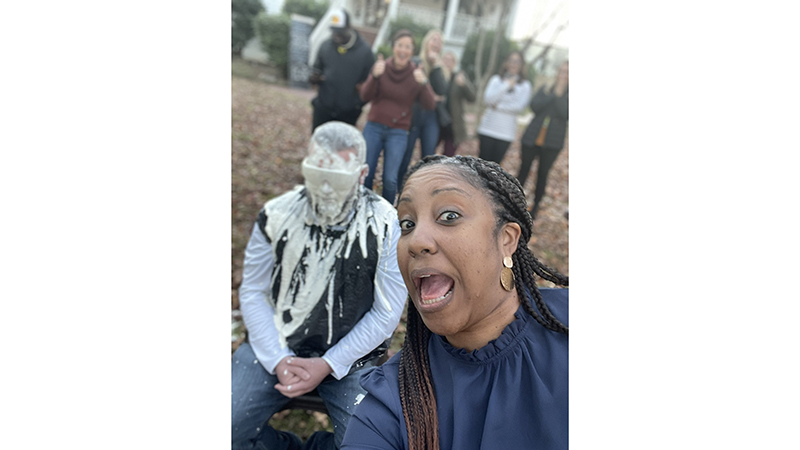 Point University raised about $40,000 for Giving Tuesday this week, according to Director Of Development Alan Hunn. He predicted that even more money is on the way.

“We’ll have checks that come in that are marked Giving Tuesday or that were made on Giving Tuesday,” he said. “So, the campaign’s over, but we’ll still receive funds probably for about another week or so.”

Hunn said the money will go toward Point University’s scholarship fund for its students.

“We actually did a couple of different things this year to get everyone involved,” he said. “We were trying to get 150 donors to give [to the school], and we did reach that goal. We got just over that number, and it was through alumni, friends of the university, students, faculty and staff.”

Point University participates in Giving Tuesday every year. It usually has competitions for this purpose. This year, students voted on which faculty or staff member would have a pie smashed in their face. The winner was Chief Enrollment Officer Rusty Hassell, who had 127 votes. Hunn said another person had 65.

Hassell said he thought the pie was made of whipped cream. This isn’t the first time he’d been chosen to have something silly done to him.

“I think it was two years ago, pre-COVID, there was a competition with the students,” he said. “And if they raised enough money, and they did raise enough money, or have enough participation, they actually dyed my beard blue. So that was entertaining.”

Point University also spent the day sharing stories from community members whose lives had been touched by the school. One was by Hassell.

“For over ten years now, I have had the honor of serving at Point University,” he wrote. “When asked why, my response is that I truly believe in the mission and ministry that take place here.”

One is his story of transferring to Point University to complete his degree.

“Then, there is my story of how God used my mix of passions and skill sets to find a ‘job’ that I love and have grown in,” he wrote. “Then, there are the student stories that I have been able to witness over the last ten years. Stories of student lives being changed. Stories of a community being impacted. Stories of people, foundations, and organizations seeing what God is doing here and financially giving to support the efforts.”

Giving Tuesday is an international day of generosity that began in 2012, according to the GivingTuesday organization.