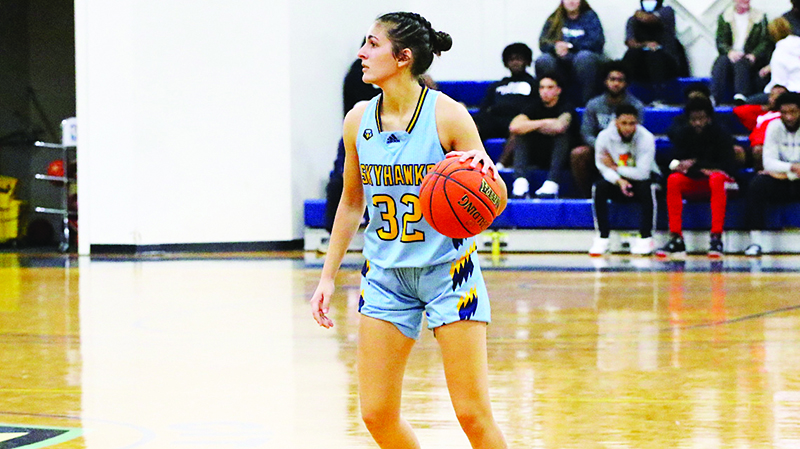 The Point University women’s basketball team traveled to Milligan University for its final matchup of the 2021 portion of its season Saturday afternoon, and despite the Skyhawks holding an 18 point lead in the third quarter, the Buffaloes used a late game surge to tie the game and send it into overtime where they would go on to hand Point its first loss of the season 77-75.

With the loss, the Skyhawks fall to 10-1 and 6-1 in Appalachian Athletic Conference play and the Buffaloes advanced to 8-4 (8-1 AAC).

The first quarter featured six ties and two lead changes, with a layup from Milligan’s Halie Padgett tying the game 16-16 with only eight seconds left in the quarter before Marta Gimenez connected for a triple at the buzzer to put Point ahead 19-16. Point held its lead for the remainder of the half with Alexis Tate giving Point a 10-point lead with three minutes remaining before the break (32-22).

At the half, Gimenez led Point with nine points and Sheyvonne Owens had seven points and seven rebounds.

With less than four minutes remaining, Gimenez gave Point its largest lead of the game with a layup to put Point ahead by 18, but the Buffaloes closed the third quarter out on an 11-2 run, to bring the score back within nine.

Milligan carried its momentum over to the fourth quarter, scoring 20 points and limiting the Skyhawks to only 11.

The Skyhawks led 67-64 with 23 seconds remaining before Milligan’s Kayla Romine’s connected for a 3-pointer to tie the game at 67 and send it into overtime.

The Buffaloes took an early 73-67 lead in overtime before Nicole Izuagie connected for an old-fashioned 3-pointer to bring the game back within three.

With 11 seconds remaining, a layup from Alexis Tate would put the Skyhawks within two points.

Point would quickly retake possession of the ball in the final seconds, but was unable to connect for a go-ahead shot or game equalizer.

Four Skyhawks made it into double figures with Gimenez leading the way, recording a double-double with 20 points and 11 rebounds and finished with a team-high of five assists.

With the conclusion of Saturday’s game, Point will return to action in 2022, as they host Bryan College in an AAC matchup on Tuesday, Jan. 4, at 4 p.m.