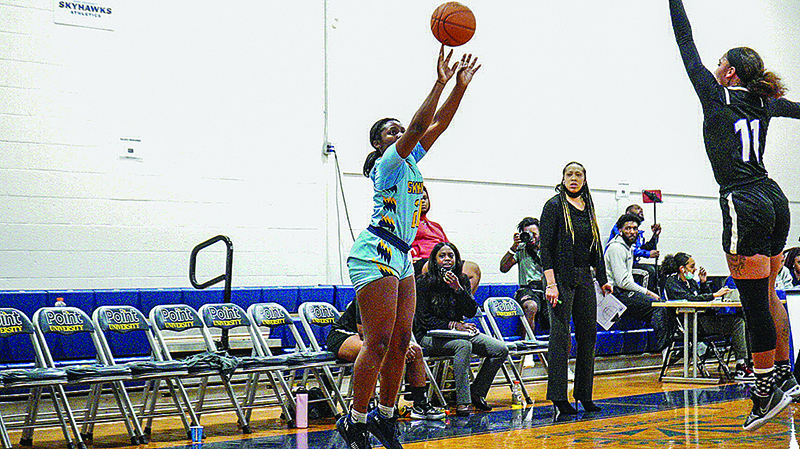 Izuagie finished the night with 24 points going 8-for-18 with 17 shot attempts from the perimeter, also breaking her school record in 3-point shot attempts. Sheyvonne Owens recorded a double-double with 16 points and 11 rebounds, and Alexis Tate followed with 12 points. Marta Gimenez had a game-high of seven assists, and Hannah Williams followed with six assists and a game-high of six steals.

Both teams were back-and-forth for over eight minutes of action before a made triple from Izuagie followed by a layup from Destinee Ellison gave Point a five-point advantage going into the second quarter (21-16).

The Lions brought the score back within three with less than eight minutes remaining in the second quarter, before Izuagie connected for another three-pointer and was followed by Ellison once again with a layup to put Point ahead 28-20. The Skyhawks entered the break leading 30-25.

Out of the break, Izuagie connected for a 3-pointer and Owens followed with back-to-back layups to enter the half on a 7-0 run. The Skyhawks led by 10 points or more for the remainder of the quarter, entering the final quarter ahead 47-34. The Skyhawks held its double-digit lead for the remainder of the game, with Izuagie giving Point a 20 point lead with her seventh 3-pointer of the night.

“We got off to a slow start, but I’m proud of the effort of our ladies,” Head Coach Tory Wooley said. “Alexis and Shey had big second halves as we played Lady Skyhawk basketball. Izuagie got hot from the three, and we rode the hot hand with her shooting. Nicole’s performance tonight was special and her teammates did an outstanding job finding her and getting her the ball. Her record-setting night of hitting eight 3-pointers will be something she will always remember. We’re going to get back to work tomorrow as we prepare to play against a good Milligan opponent.”

Up next, Point will travel to Milligan University on Saturday, Dec. 11, for its final contest of the 2021 portion of its season. Game time is scheduled for 2 p.m.