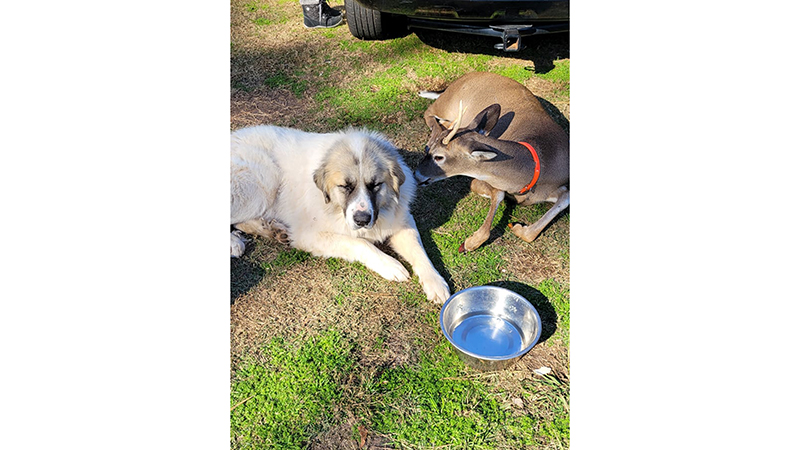 Back where he belongs: Above, Waffles the deer lies next to his friend, Goose, the Great Pyrenees dog. Waffles lives freely on 200 acres of land.

After being lost for about a week, Waffles the deer was brought home by his rehabilitator, Beth Phillips Wilson, on Thursday morning around 9:41 a.m. He had been located behind Ponder’s Nursery in Valley. Wilson credited many people who helped find him.

“A citizen called and gave me his location, and there were a couple of people there just kind of keeping him around,” she said. “The Valley Police Department came, and Animal Control came, and they went ahead and darted him, tranquilized him. And so, he’s home. He’s back on his land. He’s still sleepy, so I’m just going to stay outside with him until he gets better oriented.”

Wilson was in Orlando last week and had people taking care of her animals at her 200-acre home on Phillips Road in Huguley, where Waffles has plenty of room to live freely. According to Wilson, someone in a gold Lincoln Navigator “deernapped” him, and for whatever reason, released him in another location. Waffles was spotted Wednesday morning in the Todd Addition area in Valley.

“I’m not ever going on vacation again,” Wilson said. “I’m serious. He’s a wild animal, he lives free, but I don’t know… People just do some really stupid things.”

Wilson suspects the deernapper(s) took Waffles because he was friendly, perhaps with the intention of keeping him as a pet. She emphasized that it’s illegal to have a pet deer.

Goose the Great Pyrenees dog, who guards Wilson’s property against coyotes, seemed very happy to see Waffles, according to Wilson, who said the two animals are best friends.

Wilson said she painted the fronts of Waffles’ antlers orange with nail polish while he was sedated. She said it served the same purpose as his orange collar, which is to alert people that Waffles is someone domesticated so they won’t think he’s a rabid animal approaching them. It also protects him against hunters. Wilson said that in the past, she’s also painted Waffles’ hooves.

“When hunting season’s over, I’ll take his collar off,” she said. “But it is a breakaway collar, so if he were to leave — someone had questions about his collar, you know, putting a collar on a wild animal — and I’m like, ‘That’s just to show that he’s somewhat domesticated. But it is a breakaway. It wouldn’t choke him to death. He could get out of it.’”

While she’s rehabilitated many deer, Wilson said she’s never had one stick around for two years like Waffles has.

“I think within the next 12 months, Waffles will probably stop coming around,” she said. “I feel like at some point, he’s going to go back and live in the wild. Every other deer that I’ve rehabbed, they blend back into the wild. He’s just taking a little longer than normal.”