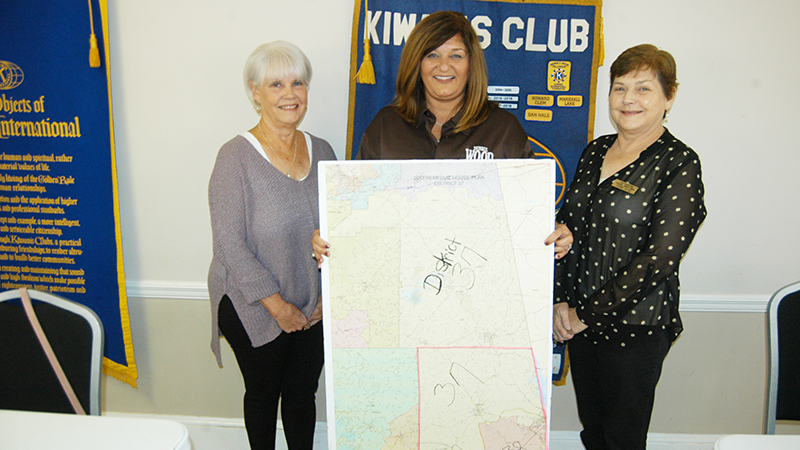 The district lines are changing — The state of Alabama’s house district lines change with every Census. Above, District 38 Representative Debbie Wood displays a map of how Chambers County was divided up following the 2010 Census. District 37 Representative Bob Fincher had most of Chambers County’s geographical area with Wood having a tiny slice in the southeast corner. Her district will likely be bigger for the next 10 years, but the majority of the district’s voters will be Lee County residents. Wood talked about this at Wednesday’s noon hour meeting of the Kiwanis Club of Valley. At right is Debbie Yates, the club president, and at left, Patsy McKenzie, the program chair.

VALLEY — With a solid majority of District 38 residents living in Lee County in 2018, Debbie Wood had an uphill fight to win the seat being vacated by DuWayne Bridges in the Alabama legislature. She had served four terms on the Chambers County Commission and was well known in her home county but not that well known in neighboring Lee County. She was at a disadvantage when campaigning for the seat against someone who lived in the Opelika area. After a lot of intensive campaigning, she won a very close race against Todd Rauch.

She will be running for reelection next year, but the district figures to be more friendly to a Chambers County candidate this time. The way the district lines ran four years ago, she had 32,000 voters in Lee County and 17,000 in Chambers. She will be picking up Huguley and Lanett this time. That will boost the Chambers County numbers to 23,000. A majority will still be in Lee County.

This is because of a population explosion that’s going on there. Along with Baldwin County, Madison County and eastern Jefferson County, Lee County is one of the fastest growing areas in Alabama. It showed up in a big way in the 2020 Census.

Wood talked about this at Wednesday’s noon hour meeting of the Kiwanis Club of Valley.

The new district lines have yet to be finalized. There are some court challenges to be dealt with, but it should be settled well in advance of the next election.

The Lee County portion of the new district (as it now stands) will include Beulah, where Wood is originally from, Lake Harding, Salem, Smiths Station and Spring Villa along with portions of Beauregard and Opelika.

Wood said she liked the redistricting plan that was proposed by the state’s Democratic Party. It was geared toward allowing each county to have a representative. That would help places like Chambers County at the expense of the fast-growing urban areas. Baldwin County, for example, grew by roughly 50,000 people but won’t be getting any additional representation as the plan now stands.

“We have to keep watch on this,” Wood said. making the case that redistricting isn’t final. “We need to be fair. Some counties are too big to be served by just one representative.”

The Alabama Legislature has 106 members. Representation is based as closely as possible on population.

Wood said that gambling will be an issue in the 2022 legislative session. There will likely be more emphasis on gaming than on a lottery.

“Gaming will generate more revenue for Alabama than a lottery,” she said.

What’s most needed, she said, is for the state to have control.

“We are out of control on gambling, and we need to get control of it,” she said.

Wood sees revenue from gambling as something that can address the state’s brain drain.

“We educate our kids and they then leave the state,” she said. “We are considering giving them $10,000 if they agree to stay in the state after graduation.”

The legislature will also have to do something about prisons. If it doesn’t, a federal judge will tell the state what to do at much greater cost.

“We have to figure out a way to make it work,” Wood said.

At Kilby Prison, for example, there’s an estimated one guard for 40 prisoners.

Wood said she had recently visited Tutwiler, the state’s prison for women. She said the conditions there were horrible.

“We need a new women’s prison,” she said. “We have close to 1,000 inmates there now. It’s the state’s fastest growing prison. We have to talk about this, and we have to do better than we have ever done before.”

Education is far and away the state’s biggest expense at a cost of around $7.6 billion a year.

Wood said it’s frustrating to her for the state to spend that much money and still be ranked near the bottom in almost every category when compared to other states.

Except for education, Alabama could operate on around $2.4 billion a year.

Wood is a broker and the chief operating officer (COO) for Century 21 Real Estate in Valley.

She and husband Bobby have been married for 31 years. They have two young adult children, Nick and Katelyn, and three granddaughters, Katherine, Lillian and Karson. Her involvement and love for Chambers County led her to run for the District 6 commission seat in 2002. She was elected that year and reelected to three more terms. In 2014, she served as president of the Association of County Commissions of Alabama (ACCA). She has also served as a representative to the National Association of County Officials Board in Washington, D.C.

In 2015, Wood was diagnosed with breast cancer. She had a double mastectomy and won the battle to full recovery with an experienced team of physicians, medication and the support and prayers from friends and family. Today she is cancer free.

Two years ago she achieved a life-long goal of graduating from college. She had earned an associate’s degree from Southern Union right out of high school, but did not transfer at the time to a four-year school. Family and career responsibilities didn’t offer her the time to do that then. She put it off for a time, but in 2019 earned that bachelor’s degree from Auburn. She had previously earned a degree from the Avery Yarbrough School of Real Estate.