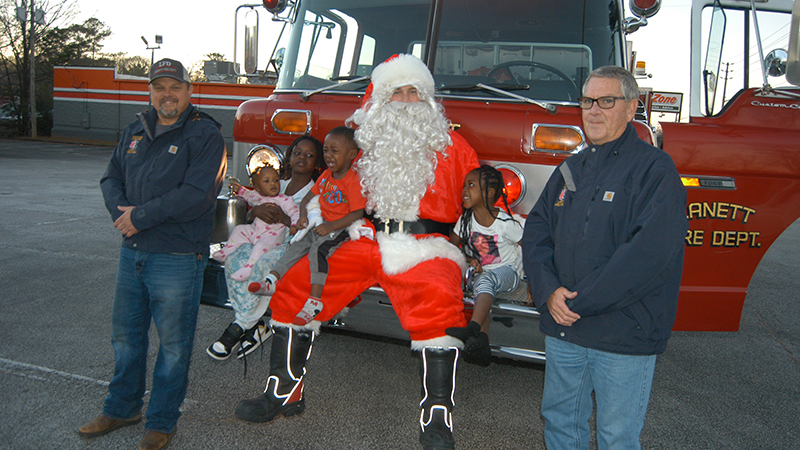 Tradition continues: When Engine No. 28 stopped at the ATL Restaurant in Lanett Friday evening, some children were there to greet him. From left, are Jamie Heard, seven-month-old Misiyah Aldridge, six-year-old Malik White, two-year-old Christian White, Santa, four-year-old Kyangel White and Chief Johnny Allen. The children were with their mom, Armanda Aldridge, of Lanett. Photo by Wayne Clark.

A local tradition continued on Friday as Santa Claus made Christmas Eve appearances aboard fire trucks in Valley, Lanett and West Point. Fire departments in the three cities were generous in riding him around the neighborhoods for several hours. He started his Valleywide journey on an East Alabama Fire Department truck and went through River View, Fairfax, Langdale and Shawmut. He started at approximately 1:30 p.m. and rode for several hours through Valley neighborhoods before visiting Lanett neighborhoods and waving at the crowds that came out to see him. He ended a fun evening for everyone in West Point.

Santa admitted that his arms had gotten sore from all the waving at crowds, but he’d been delighted to see all the people, especially the children.

He made one more trip through Lanett on back of Engine No. 28. It’s a spare truck that doesn’t see active duty but is in tip-top shape when Santa comes to town for his annual ride.

“We always enjoy doing this,” said Lanett Fire & EMS Chief Johnny Allen. “We’ll keep doing it as long as the citizens turn out and like what they see.”

Chief Allen led the way in an SUV with Engine No. 28 following. People all over town could hear No. 28’s honking horn and sirens. Santa was easy to see, sitting on the back of the truck under a spotlight.