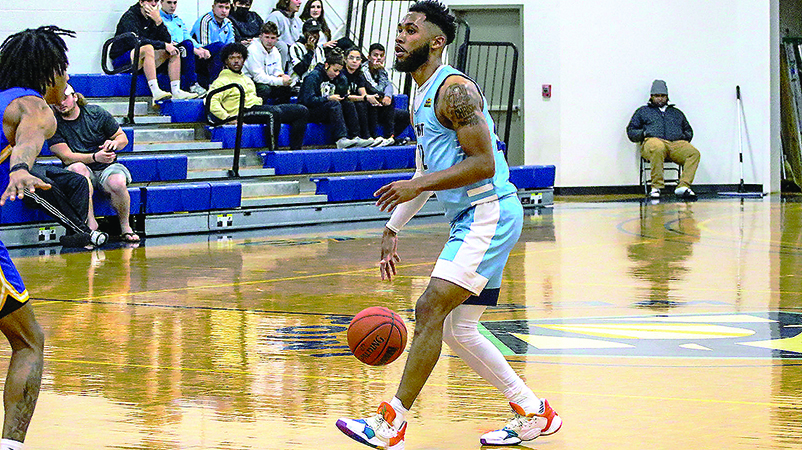 Setting up the offense: Senior G, Lorenzo Freeman Jr from Northport led the Point Skyhawks to a 94-72 victory over Johnson & Wales on Thursday. Freeman scored a season-high 27 points to lead all scorers. Point travels to Tennessee to battle Milligan University Saturday at 4:00 p.m. EST.

The Skyhawks advance to 7-6 overall and end a four-game losing streak with the victory.

Freeman was 5-for-12 from the perimeter and added nine rebounds, two assists and three steals to his stat line. He was followed by Corey Bowen with 18 points, Ray Reeves with 13 points and Gentrell Taylor with 12 points and eight rebounds. Jake Smith led the team with eight assists, adding eight boards to his stat line. Javier Turner recorded nine points and five rebounds off the bench, and Jack Gray had seven points.

The Wildcats took an early 4-1 lead before a dunk by Bowen, followed by a triple from Reeves, gave Point its first lead of the night 6-4. The Skyhawks held its lead by single digits for nearly the entire first half until Reeves connected for a 3-pointer and drew a foul to connect for a free throw to send Point into a double-digit lead entering the second half. Point led 42-31 at the break, with Freeman leading the team with 12 points and Reeves and Bowen accounting for 10 points apiece.

Out of the break, the Skyhawks would go on a 14-6 run in the first four minutes of play, with Freeman connecting for two 3-pointers and Reeves connecting for his third triple of the night. With less than 17 minutes remaining, the Skyhawks led 56-37. Point held its double-digit lead for the remainder of the half, with Gray giving Point its first 20 point lead with a made triple followed by a jumper from the paint with 12 minutes remaining. The Skyhawks earned their largest lead of the night at 24 points, with 1:17 remaining in the game after a layup from Nichaune Jones.

Up next, Point will travel to Milligan University on Saturday, Dec. 11, for its final Appalachian Athletic Conference matchup of the 2021 portion of its season. Tipoff is scheduled for 4 p.m.