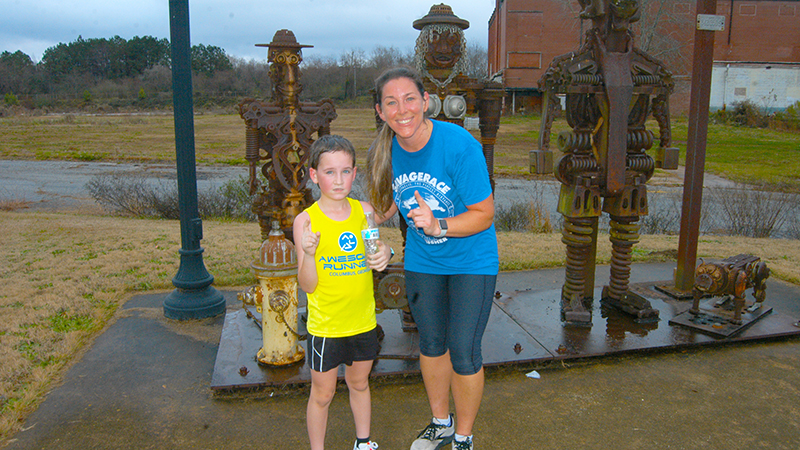 Winners: Logan James (left) and Chelsea Bunn (right) were the winners in Saturday’s Sleigh the 5K race in Valley. Logan was the overall winner with a time of 23 minutes and 29 seconds. Photo by Wayne Clark.

VALLEY — There were more than 40 participants in Saturday’s Sleigh the 5K on the CV Railroad Trail, and the first across the finish line was a nine-year-old boy. Logan James blistered the course with a time of 23 minutes and 29 seconds. Right on his heels crossing the line was his dad Jimmy James.

A total of 35 people either ran, jogged or walked the course. Seven more competed in it virtually. They ran a timed 5K race at another location on the same day and entered their time. A number of the runners in the race are competing in the Run and See Georgia event. They could earn points by running in the race, and the Sleigh the 5K was one of the final ones of calendar year 2021. An awards ceremony in January will honor those who did well in this year’s racing series.

At 25:06, Chelsea Bunn had the best time among the women who took part in the race.

The start/finish line was set up next to Rusty and the Iron Family on the CV Trail. The course headed south through the Horace King Memorial Covered Bridge, past the Langdale Methodist Church up a steep grade parallel to Highway 29 all the way to just past the Fairfax Village Antique Market (formerly Taunton’s Hardware), where there was a turnaround table with bottled water for the runners.

The hardest part of the race was the first half, which was all uphill and into a stiff wind. The finishing leg was far easier. It was downhill and with the wind at the runners’ backs.

The 5K race was planned to be the first part of a busy day at the Christmas merry-go-round. It went on as scheduled, but the second part of the big day was postponed because of rain. Santa Claus was scheduled to arrive at 6:30 p.m. with Christmas characters such as the Grinch, Cindy Lou Who and a Snowman.

This is the 65th year for a Christmas merry-go-round in the Valley. It started in 1956 and has taken place every Christmas season since then.