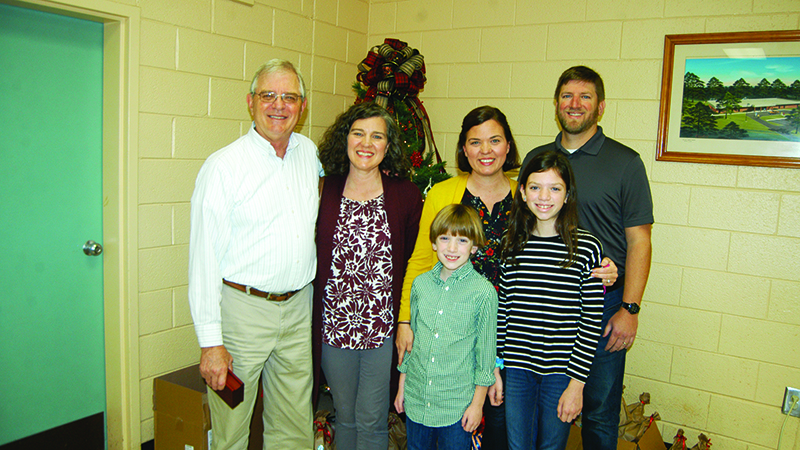 Volunteer of the year: Eddie Lanier (at left) was much surprised when he was named Valley Haven School’s Volunteer of the Year at Thursday’s annual Christmas dinner. He was even more surprised when his two daughters, son-in-law and two grandchildren walked into the room during the presentation. From left, are daughters Laura Davison and Katie Slade and son-in-law Stefan Slade. In front, left to right, are grandchildren Isaac and Anna Slade. Photo by Wayne Clark.

VALLEY — Long-time Valley Haven supporter Eddie Lanier was in for two surprises at the school’s annual Christmas dinner on Thursday. First, he received the Valley Haven Volunteer of the Year award, and second, his two daughters, a son-in-law and two grandchildren were there to see it.

“When his name came up as a possible volunteer of the year, everyone agreed he was the ideal person for the award,” Executive Director Craig Brown said in announcing the award. “It was a unanimous decision.”

Brown commended him for always being there when Valley Haven needed volunteer help and always having good ideas.

Lanier was clearly taken off guard by the award, which was presented in the school cafeteria. As he was receiving the award from Brown, his family walked in together from the side entrance.

It was no doubt a Christmas-came-early event for Lanier. The group included daughters Laura Davison and Katie Slade, son-in-law Stefan Slade and grandchildren Isaac and Anna Slade.

Lanier retired from WestPoint Home last November after 44 years with the company. For the past 10 years or so, he had been among a handful of local IT support staff and mill store employees still employed by the company.

Lanier is a long-time supporter of Springwood School. He’s also involved with the New Horizon Community Theatre and a member of the West Point Lions Club.

Brown told the annual dinner attendees that Valley Haven School had gone through two difficult years with Covid-19 but that things are now starting to pick up.

In February 2021, enrollment dropped to 13 adults. It’s now back up to 53 adults and 27 infants in the early intervention program. Several more adults are considering going back to class at Valley Haven.

“We are really pleased with the increase in numbers,” Brown said. “We now have 18 full or part-time workers and four contract workers. It has been a struggle the past two years. In addition to dealing with Covid, we had some unexpected issues as well. Our hot water heater went down, and it cost us thousands of dollars to fix. Things are getting better, and we are looking forward to 2022. We think it could be one of our best years ever.”