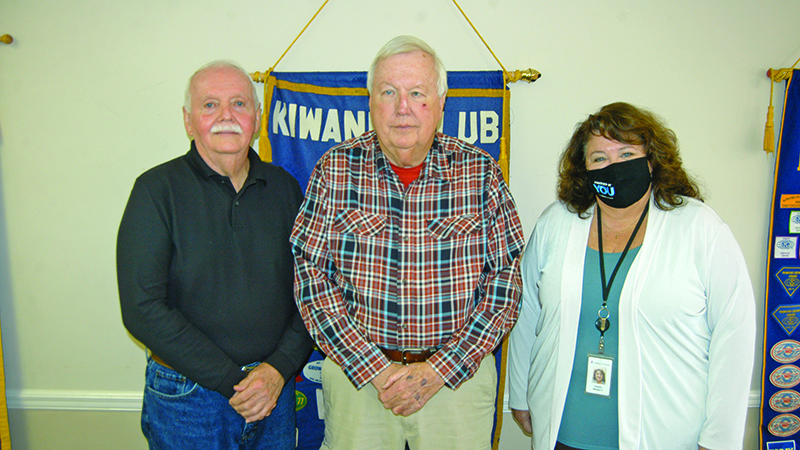 VALLEY — Valley Mayor Leonard Riley told members of the Kiwanis Club of Valley on Wednesday that housing is the city’s greatest need right now. The city gained over 1,500 people in the 2020 Census, and according to Riley, would have gained significantly more than that had adequate housing been available.

A step in the right direction of having more homes is taking place right now off Combs Road on Valley’s west side. A total of 370 lots are available in Camellia Crossing, a major subdivision being built by Holland Homes of Auburn.

What will be the subdivision’s first new home is now under construction. More will be going up in the near future. They could be available for sale as early as next spring.

Riley said it had been amazing to watch the construction and startup of the new John Soules Foods plant off Towel Avenue.

“I have never seen that much concrete being poured and steel going up in my life,” he said. “They have lots of robotics in the plant. They can produce 14,000 pounds of chicken in an hour on one production line, and they will have five of them in a few years.”

“The employees are making at least $14 an hour,” he said.

A lift station near the junction of Towel Avenue and Fairfax Bypass was a complex operation. A hole had to be dug more than 40 feet into the ground and three separate pumps installed. It cost roughly $2.4 million to do that. Altogether, John Soules Foods has invested more than $140 million in the startup of its third plant in Valley. It has other production facilities in Tyler, Texas and Gainesville, Georgia. The Valley plant is expected to be the company’s most technologically advanced plant once it’s in full production.

The mayor said it’s amazing to see the truck traffic arriving and leaving the plant every day.

Riley thanked the company for already being a good corporate citizen.

The success of John Soules Foods, along with the continuing success of Kia and its suppliers and other plants such as WestRock, Knauf and West Frazier (Norbord) are driving forces behind the demand for housing in the Valley area.

Valley has enjoyed a sales tax boom in recent years. The city was receiving approximately $6 million a year just four years ago and around $2 million a year ten years ago. That jumped to $8.7 million in fiscal year 2020-21, which ended on Sept. 30. That trend continued to grow in the first two months of FY 2021-22.

Riley attributes this to more and more local people shopping at home. Another factor is Alabama’s internet tax. This generates revenue from companies like Amazon that sell online to people who live here. That tax generated $17,000 for the City of Valley in 2017 and more than $420,000 this past year.

The construction of the John Soules Foods plant was a windfall for the city. The contractors who did work here paid local taxes as did the workers who stayed in local hotels, ate in local restaurants and made purchases in local stores.

On the downside, it takes longer to order materials now and the costs are much higher. Concrete pipe, for example, has risen from around $30 a foot to more than $100 a foot. The pipe that’s on the Burney property right now costs $278,000.

The city has done a large amount of road paving the last three years and plans to do even more in the coming year. A total of 38 city streets will go out for bids next June. Valley has seven council districts, and each one of those districts will get from five to seven streets paved.

“If you’d like for a street to be paved in your council district, call your council member and talk to them about it,” Riley said.

The city is also looking to get some new sidewalks to replace some aging ones that are broken up and in need of replacing. This will cost an estimated $565,000, and the city is looking for grants to help with the costs.

“We are also looking at getting some charging stations for electric cars,” Riley said.

This is a very busy period for the city.

“We have more projects going on right now than we know what to do with,” Riley said. “I wouldn’t have it any other way.”

One of the city’s major goals is to tear down unsightly houses and clean up overgrown properties.

“We have torn down 160 nuisance houses in the last seven years,” Riley said. “We want our city clean and looking good.”

This also applies to junk vehicles. Numerous old cars and trucks that haven’t been driven in years have been towed away from neighborhoods.

Roadside litter remains a problem, but that doesn’t stop the city from encouraging the public to be more conscientious about this.

In recent years, the city has done some bond refinancing to get interest rates at 2.5 percent or lower. It’s a positive to have locked in those rates since they will probably be going up soon.

“We should be in good financial condition for years to come,” Riley said. “We have over $3 million in reserve.”

The mayor is pleased that some needed improvements have taken place at City Park and credits the Fairfax Junior Variety Club for heading it up.

Some new playground equipment went in this year and more will be on the way in 2022.