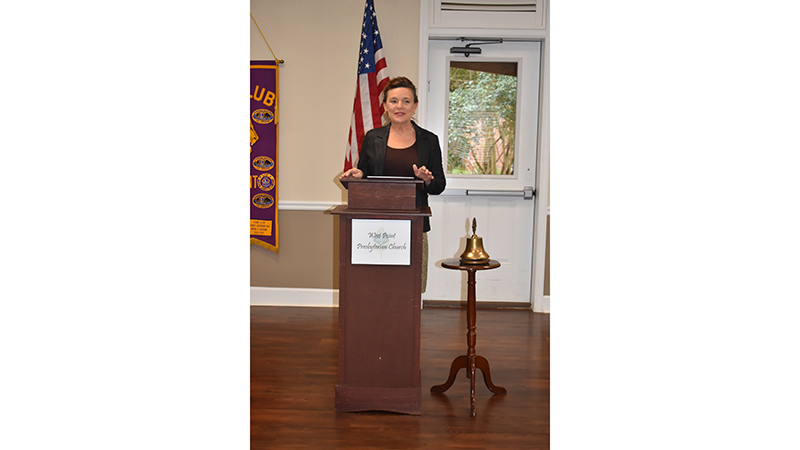 On Wednesday, the West Point Lions Club not only had a guest speaker, Julia Langley of New Horizon Community Theatre, but also observed the 85th anniversary of the club. Langley attended the meeting with Anna Slade, a student of hers from Montgomery.

Langley is a Wadley native and former international performer with Cirque du Soleil. She has been in all 50 states and 16 foreign countries. She lives in South Florida near Boca Raton but visits West Point every year.

Langley has been working with New Horizon Community Theatre in West Point for 13 years. She now teaches a performing arts camp there every summer and also puts on a Christmas show each December.

Langley called the theater “a gem” in the community.

“Someone that’s not involved in theater might not understand the value of what that theater is actually giving to your community,” she said.

Langley said performance doesn’t just take place on stage, and that it’s also about talking to various people every day. She said that practicing at the theater gives people skills they can use in job interviews, in sales and in teaching. She said she learns from every person she meets there.

In 2019, Langley’s career with Cirque du Soleil ended when she got hit by a car while riding her bicycle through an intersection.

Langley soon discovered she had several broken bones, two traumatic head injuries, and a spinal cord injury. She said she was diagnosed with PTSD about four months after her accident.

As she was recovering from spinal cord surgery, the COVID-19 pandemic sent Cirque du Soleil into bankruptcy.

Langley also had hip surgery in 2020 and shoulder surgery five weeks ago due to the accident.

She lost her father in February. One month later, her mother’s house was destroyed by an F3 tornado. Langley said she and her dog, Sam, were in the house when it happened.

To cope with adversity in her life, Langley said she prays often and stays positive and grateful.

“The good that this brought to my life is that I had the chance to do some self-care that I had ignored for a really long period of time,” she said. “I was forced to take care of myself.”

Langley said her injuries and losing her job enabled her to spend time with her family, which was especially fortunate considering that her father didn’t have much time left.

Langley said the adversity she faced also caused her to transform her career into an opportunity to help others.

“I have a program called Singing for Success where I train leaders,” she said. “I train managers to learn how to use their voice to become the best version of themselves.”

Langley said she now trains people to stand in their power and show it to the world.

Langley had Slade help her sing “Deck the Halls” by singing the “falala” part. Then, she had the entire audience do the same.

This year, New Horizon Community Theatre will put on two Christmas performances on Saturday, Dec. 18 at 2 p.m. and 7 pm. Langley said there will be a band and 20 performers from East Alabama and West Georgia. Proceeds from the show will got to the New Horizons scholarship fund to help young people go to college. Tickets can be bought at nhct.org or at the door.

New Horizon Theatre’s summer camp in 2022 will be during the last week of June.

At the beginning of the meeting, club member Eddie Lanier read the history of the West Point Lions Club.

The Lions Club as an international organization has its roots in Chicago. In 1917, a business leader there named Melvin Jones thought business clubs of the day should move beyond business issues and try to improve the lives of others in their communities and around the world. Jones’ group, the Business Circle of Chicago, agreed. An organizational meeting between them and similar groups was held on June 7, 1917. The new group took the name of one of the invited groups, the Association of Lions Clubs. In October, a national convention was held in Dallas, Texas, where the Association of Lions Clubs adopted a constitution, bylaws and a code of ethics. The Lions became an international organization within three years.

“By 1936, there were 2,734 clubs in six countries, with over 80,000 members, including several in the state of Georgia,” Lanier said. “On Wednesday April 29, 25 leading citizens of the Valley gathered at the Charles Hotel (which was later renamed the General Tyler Hotel) to organize the West Point Lions Club, electing West Point postmaster Jett Potts as president.”

In 1947, the club name was changed to Valley Lions Club to better reflect the nature of its membership. In the early 1960s, it split into two clubs, with West Point Lions Club remaining in the Georgia Lions and the Valley Lions Club becoming part of the Alabama Lions.

“For the past 75, now 85 years, the West Point Lions Club has continued to make a difference in the community,” Lanier said. “We have enjoyed fun and fellowship at our regular meetings, walked miles selling mops and brooms, hammered nails at Habitat building sites, cooked barbecue, and made lifetime friends. As we celebrate our 85th anniversary, let us commit ourselves to ensure a bright future for many more years of service to our fellow citizens.”