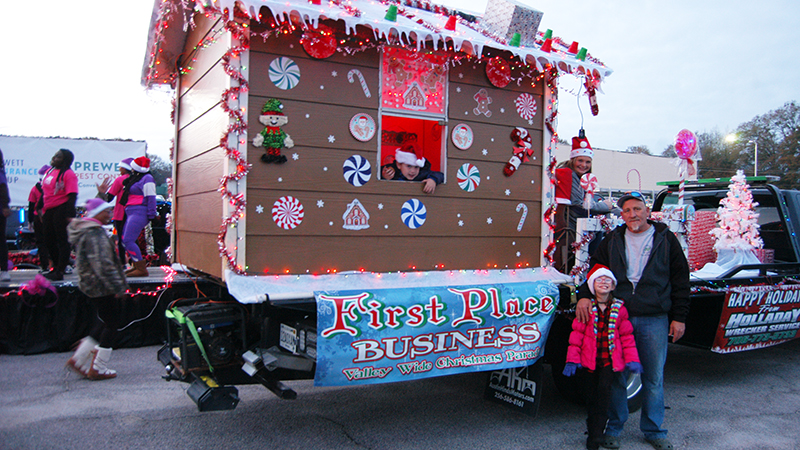 First place business — Jody and Hailey Buckner (at right) are shown above with the Holladay Wrecker Service float in Thursday’s Valleywide Christmas Parade. It won the first-place banner in the Business division. Mr. Buckner is a driver for Holladay. The float had a playhouse he built for eight-year-old Hailey. To get it ready for the parade, he painted it brown and installed a workable chimney. Looking through the playhouse window is Hailey’s cousin, Carter Lebrija.

The 36th Annual Valleywide Christmas Parade had a nice bounce back from last year’s parade, which took place during the height of the Covid-19 pandemic. The total number of entries and the number of high school bands taking part were both more than last year. All in all, more than 75 entries and four bands participated in Thursday evening’s parade that started in Lanett, went through downtown West Point and ended up in Valley.

The Holladay Wrecker Service float featured a little girl’s playhouse. Jody Buckner, a driver for Holladay, spent several weeks converting an existing playhouse for display in the parade. His eight-year-old daughter, Hailey, had a pink playhouse in their backyard. Jody painted it brown and installed a workable chimney that belched gray smoke all along the route. Hailey’s cousin, Carter Lebrija, had a bird’s eye view of the parade crowd, watching from an open window in the playhouse.

Celebrate Recovery’s winning entry featured a Christmas tree with large ornaments denoting 30, 60 and 90 day periods of being substance free, going all the way to a one-year goal. The float was assembled by members of the Pine Grove Church in Beulah. It took them several weeks to finish it.

Huguley Elementary’s winning float in the schools division had a theme that education is a very special gift.

“We wanted to make the point that education is always a gift,” said Philip Jenkins, the school principal. “It’s especially true in the current time as we are recovering from a pandemic.”

Riding on the float were member of the school’s Student Government Association (SGA) and the fall festival king and queen.