WWII veteran honored with quilt from Quilts of Valor 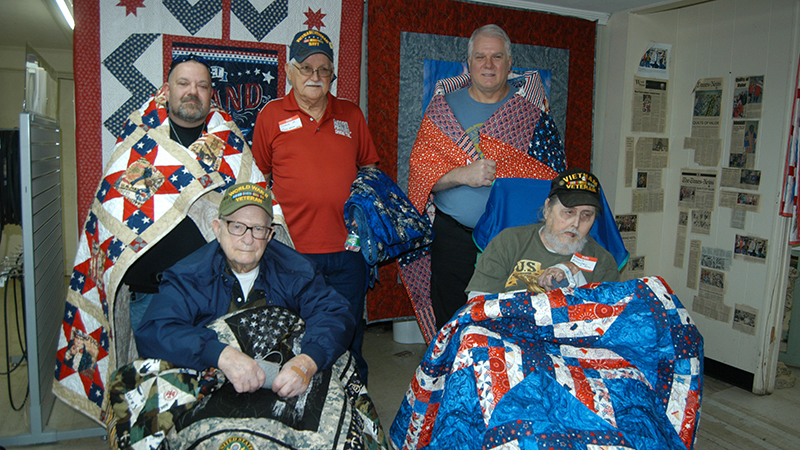 WWII veteran honored: On Saturday, World War II veteran Luther Heath (on the left) was honored for his military service with a Quilt of Valor presentation.

WEST POINT — On Saturday, a long-time Lanett resident received some much-deserved recognition for serving his country in World War II and for being a model citizen for many years. Luther Heath will celebrate his 101st birthday this coming Friday.

Heath was given a police escort to Saturday’s monthly Quilts of Valor ceremony at SewingMachine.com in downtown West Point. He was one of five recipients to receive a quilt from the Georgia-Alabama State Line chapter of the Quilts of Valor.

Heath served in the European Theater during World War II. He was there from 1943 to 1945, a time when U.S. soldiers saw action in North Africa, Italy, France and Germany.

Heath was born in Camp Hill, Alabama on Dec. 10, 1920. He was living in Mobile when drafted into the Army when he was in his early twenties. He moved to Lanett after the war and has been living in the local area ever since. He was employed by Sims Metal Works for many years. He started as a welder and moved up to being a draftsman for the company. He worked until he was 86 years old. Four of his five children are still living. Daughters Sally DeJournette and Sara Gore were with him for his big day on Saturday. He also has a third daughter, Julia Magourik, and a son, Zachary Heath.

For a number of years, Heath participated in the Lanett Senior Center’s meal delivery program.

“When we drove it to his home you could count on him sitting on his front porch waiting for us to come by,” said Tammy Hollis, the former senior center director. “He especially loved the desserts.”

Heath now lives at Valley Park Assisted Living. He was driven to the Saturday ceremony by Lt. McCullough. They were met at the state line by Patrol Officer Brandon Longshore of the West Point Police Department, who escorted them to sewingmachine.com on West 3rd Avenue.

“It just made his day to get a police escort,” said Sandra Thornton, the current senior center director in Lanett.