2021 sports year in review; Closing out the year 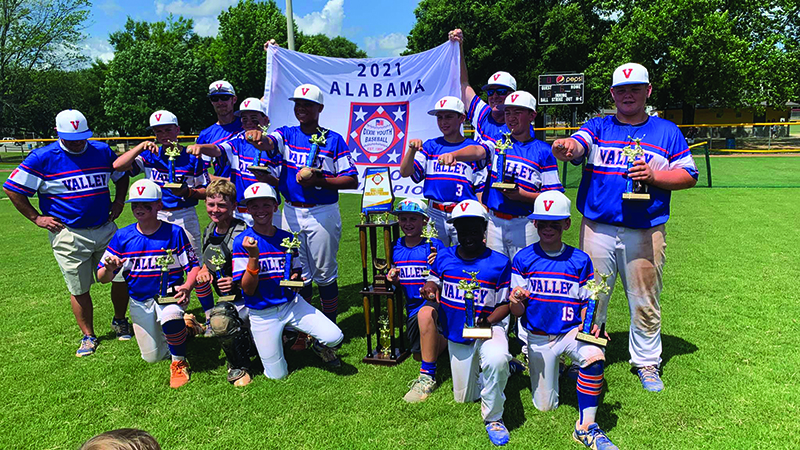 2021 in photos: Above, The Valley 12U All Star team poses after securing its spot in the Dixie Youth Baseball World Series. File photo.

EDITOR’S NOTE: This is the last in a five-part series looking back at the year 2021.

The Chambers County School Board approved the hires of Chase Lewis and Matt Hicks to fill the roles of LaFayette head basketball coach and Valley head baseball coach, respectively.

Lewis joins LaFayette after coaching at Ashford High School, a 4A program in Houston County.

Hicks takes over as the Rams’ new baseball coach replacing Patrick Shivers, who was not renewed as the Rams’ head coach.

Point University Athletic Director Alan Wilson announced his retirement, effective September 2021. Wilson has been a part of the athletic department at Point since 1996 and has spent the last 10 years serving as the Skyhawks’ athletic director.

The Valley 11-and-12-year-old Ozone all-star team arrived in Laurel, Mississippi on Wednesday, and by Thursday, first baseman Jax Miller had already left a mark in the 2021 Dixie Youth World Series by slugging 16 home runs during the 12U Ozone home run derby.

The achievements just keep coming for Jackson Sanders. Sanders, who is already committed to play baseball at Auburn, was selected to play for the USA 15U National Team this past summer.

Members of the Valley Area Swim Team were honored by the Valley City Council Monday evening after having completed a very successful year. Twenty-six of the 31 youngsters who competed in the district swim meet in Opelika advanced to the state finals in Albertville.

the Chambers Academy Rebels started the 2021 football season the way they ended the 2020 year, winning and winning big,

The Rebels blasted the Lee-Scott Warriors 41-3.

It was a milestone win for Coach Jason Allen. It was win number 150 in his coaching career. Most of those wins were at Chambers, but some came when he was the head coach at Glenwood.

Coming into the matchup against Georgiana, Lanett Panthers coach Clifford Story was on the brink of 100 wins.

It did not take long for the Panthers to help Story achieve that milestone. Lanett imposed their will and took down the Georgiana Panthers 54-7 at Morgan-Washburn Stadium.

At the Carhartt Bassmaster College Series National Championship, presented by Bass Pro Shops, Valley native Conner Crosby and his teammate, James Cobbs, were among four Auburn University anglers to advance to Championship on Saturday at the St. Lawrence River in Waddington, New York.

Valley beats Lanett in another classic matchup between the two rivals

In another game for the ages, the Valley Rams held on for a 14-8 victory over rival Lanett for the second straight year.

LaFayette makes a statement with 34-12 win over Randolph County

LaFayette High’s dynamic duo running back tandem of B.J. Baker and Joshua Combs combined for 233 yards and four touchdowns, all in the first half, to lead the Bulldogs to an impressive 34-12 win over the Randolph County Tigers.

Point University announced the hiring of Jaunelle White as its new athletic director. White is the university’s third AD and the first female to hold the position at Point.

The Chambers Academy volleyball team was only a few points from the Class AA state volleyball championship.

The Rebels ended up losing in heartbreaking fashion to Edgewood Academy in a back and forth match at Cramton Bowl in Montgomery.

For the first time in program history, the Point University men’s soccer team has advanced to the NAIA Men’s Soccer National Championship.

The Skyhawks would eventually fall in the first round 3-0 to Columbia College.

Lanett falls to Highland Home in third round of playoffs

Lanett saw its season end in heartbreak when Highland Home converted a two-point conversion in the fourth quarter. The gutsy two-point call gave the Flying Squadron a 15-14 victory over the No. 1 ranked Panthers, resulting in one of the biggest upsets of the class 2A playoffs.

The Mid-South Conference announced the Appalachian Division All-Conference teams, and freshman Gabriel Jacon-Duffy was named the Defensive Player of the Year and Defensive Freshman of the Year to headline the Point University football team’s award recipients. Senior Parker Clemons and junior Aaron Anderson joined Jacon-Duffy on the All-MSC First Team.

AHSAA reclassification moves Valley back to Class 5A for 2022-2024

After a two-year stint in 6A, the Valley Rams will move back into familiar territory at 5A. The Rams will reside in region 4 alongside, Beauregard, Central, Clay County, Elmore County, Sylacauga and Tallassee.

Lanett and LaFayette will remain in class 2A and play alongside Barbour County, Goshen High School, Highland Home, Horseshoe Bend, Luverne and Reeltown.