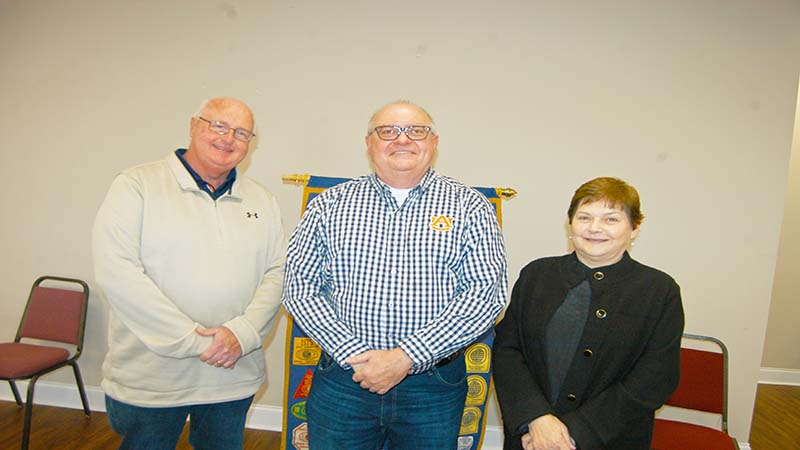 Kiwanis program — During the noon hour on Wednesday, Valley native David Bell (at center) talked to the Kiwanis Club of Valley about how dreams can come true late in life. Bell told members of the club that he had survived a serious illness several years ago. Surviving it gave him the opportunity to reconnect with a former sweetheart he hadn’t seen in 38 years. They are planning to get married this coming May. At right is Debbie Yates, club president, and at left is Jeff Goodwin, program chairman. Photo by Wayne Clark.

VALLEY —  On Wednesday, David Bell said that dreams can sometimes come true for those who have survived a major crisis in their life.

The public relations officer for the Chambers County School District, Bell talked about this happening to him at Wednesday’s noon hour meeting of the Kiwanis Club of Valley.

Bell’s dream come true involves reconnecting with a sweetheart he’d lost some 38 years ago. The crisis he endured was in the form of a health scare his doctors at one point told him would be fatal.

“I felt a pain in my chest one day,” he said. “It was the kind of pain I had never felt before, and I had it immediately checked out. Since I had been a smoker, I expected the worst.”

At first, the news wasn’t so bad.

“I was worried it might be lung cancer,” he said. “I was relieved when they told me it was a condition known as pleurisy and was treatable.”

Pleurisy is an inflammation of the lung and causes pain when breathing. It’s caused by pneumonia or other diseases of the chest or abdomen.

It was something worse than pleurisy that brought him near death.

“One of my lungs was filling with fluid,” he said. “It was later determined that a bacteria of unknown origin was causing it. At one point, every organ in my body was on the way to shutting down. There were three doctors treating me at the time. Two of them didn’t think I would survive. Fortunately, the lead doctor thought I could get over it. He thought my condition would slowly improve with treatment. I am so thankful he was right and the other two doctors were wrong.”

As his condition improved, Bell often pondered why it was he survived while so many others who faced a health crisis had not.

He credits his late mother, Dorothy “Dot” Bell, for her constant prayers for her children.

“She was always asking God to surround us with angels,” he said. “God answered those prayers, and that’s why I am standing before you today.”

Bell continued to believe that there must be a reason he survived.

“I had an infection that was taking over my whole body,” he said. “At one point, it looked like all my organs would fail. Somehow, I made it through that. I kept thinking there must be a reason.”

He found an answer near the end of the year 2020 dominated by COVID.

“I found out why on December 26, 2020,” he said. “On the day after Christmas I reconnected with someone I had somehow lost track of many years ago.”

It was a former sweetheart named Lisa Ledbetter.

“We dated between 1978 and 1982,” Bell said. “We somehow drifted apart, but I never forgot about her. I found out on social media that she had been living in Opelika all along.”

Bell graduated from Valley High in 1975 and Ledbetter from Opelika High in 1982.

They plan to get married this coming May.

“I thought about her so many times since we broke up,” Bell said. “Never in a million years did I think I’d ever see her again. She was in Opelika all those years. As many times as I had been there since 1982, I had probably been in the same building with her many times and didn’t know it.”

Bell grew up in the Fairfax community, hoping to one day be in radio.

“I remember listening to AM radio stations at night from far away places,” he said. “I thought it was so neat my little transistor radio could pick up WWL in New Orleans, WLAC in Nashville and WLS in Chicago. I was fascinated by the voices you could hear on that radio. Some of those voices were eloquent and others made you laugh.”

When he was 12, Bell got a cassette recorder as a present. It was like having his own radio station. He made lots and lots of cassette tapes.

“I still have them,” he said. “When I want a good laugh, I get them out and play them. I can hear the great ideas I had back then of having a radio show.”

Bell said he was fortunate to have had English teachers like Elizabeth Calhoun (both at Fairfax Elementary and later on at Valley High) and Susie Burns, wife of Valley Junior High Principal W.F. Burns.

“Mr. and Mrs. Burns were ideal to bring the school though a transition period,” Bell said. “Elizabeth Calhoun was strict, but you always learned something in her class. She was tough. When I got through her class at Fairfax Elementary, I thought I’d never have to go through that again, but I did have her again at Valley High. I am now glad I did. She was so influential. Mrs. Burns was too. They helped me follow my dreams.”

Over the years, Bell has been a public information officer for the Troup County Sheriff’s Office and for Troup County Parks & Recreation. He’s also been a news writer for The Troup County News and for The Valley Times-News.

A chance visit to the Valley campus of Southern Union State Community College opened another door for him. A job fair was taking place at the time. He stopped to take a look at all the booths and what kind of jobs were available. This gave him the time to talk to Dr. Kelli Hodge, who was then the superintendent of the Chambers County School District.

“She told me they were looking for a public relations officer,” he said. “Now this was the school district where I had received my education and still loved. I jumped at the chance to apply for that job.”

He was hired, and it has been a pretty good career for him. Soon, it will be a continuing career for a newly married man.