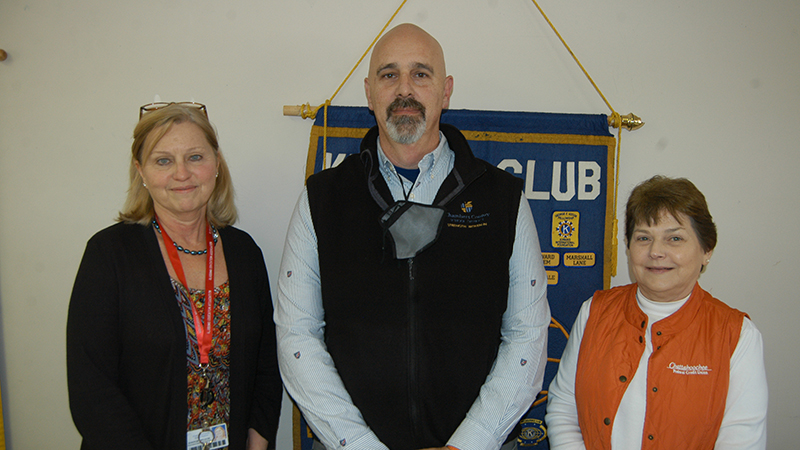 Talking tech: Michael Sanders (at center) talked about technology in the classroom at Wednesday’s noon-hour meeting of the Kiwanis Club of Valley. At left is Dr. Sharon Weldon, the program chair, and at right is Debbie Yates, the club president. Photo by Wayne Clark.

VALLEY — Michael Sanders, the technology coordinator for the Chambers County School District, talked about the many challenges posed by virtual education at Wednesday’s noon-hour meeting of the Kiwanis Club of Valley. He was introduced by the school system’s director of secondary schools, Dr. Sharon Weldon, as “a problem solver and someone who can teach old dogs new tricks.”

The COVID-19 pandemic has had an enormous impact on education over the past two years. There have been times when virtual education was the only connection between a student and their education. This was hard enough for those who live in cities where high-speed internet is widely available. That’s not the case in rural areas, where many families can’t get high-speed internet.

Sanders is a native of Chambers County’s Marcoot community. He has a bachelor’s degree from Auburn University and a master’s degree from Wayland Baptist University in Plainview, Texas. He worked as an IT specialist in Texas for several years before an opportunity came open for him to come back to Chambers County and work for the school system. He has been here now for some 13 years.

When he started with the CCSD, there were around 1,000 computers in the school system. That broke down to one for every four students. The goal at that time was to get down to a 1:1 ratio. Just before COVID hit, Chambers County arrived at that ratio when mobile devices were figured in.

“It’s been very challenging to keep our system running,” Sanders said. “We have gone through a shutdown period and all-virtual learning, 10-day quarantines to five-day quarantines. The federal and the state government has thrown a lot of money at the problem. We have had a whole lot of money to spend.”

Sanders said the Chambers County School District is looking at purchasing 5,000 new Chromebooks. Some of the older ones will be replaced for classroom use with students being allowed to take the old ones home with them.

“There’s a big problem with students who live in rural areas,” Sanders said. “In some cases, they have a mobile device at home but can’t get on the internet.”

This puts them at a big disadvantage compared to the students who do have internet service in their home. In many cases. the student has to be driven by a family member to a location where they can get the internet via Wi-FI.

Wi-Fi is a technology and a means of connecting to broadband to access the internet. Broadband is a type of internet connection that’s given by a service provider. Broadband connections tend to be more secure and consistent than Wi-Fi connections.

There is a variety of ways to connect with broadband. These include ADSL, fiber, satellite and mobile services. The most significant difference between dial-up and broadband for end-users is the speed of data transmission with broadband offering greater capacity.

There are vouchers from the USDA to help people in rural areas have access to the internet.

Sanders asked if anyone had seen any low-orbit satellites lately. Famed entrepreneur Elan Musk is having them deployed by SpaceX. Each satellite weighs approximately 570 pounds. They are being launched by SpaceX as many as 60 at one time. The goal is to launch more than 1,500 of them in low earth orbits to provide satellite internet coverage. When they are overhead in the early evenings and early mornings, they are bright objects lined up in a row. Musk has a goal of having global internet service this year.

5G technology is a coming thing.

“It will help a lot of people but won’t solve all the problems,” Sanders said.

The CCSD has been having a problem getting the switches needed for its IT system.

“We ordered them in August but haven’t gotten them yet,” Sanders said. “There’s also been the problem of Chromebook prices bouncing up and down.”

Chromebooks have been popular items for school systems due to their affordability. A Chromebook can cost hundreds of dollars. By comparison, low-end iPads cost around $300.

The use of technology in the classroom, said Dr. Weldon, comes down to what the students will use and what the teacher is comfortable with.

“Kids are masterful in moving things around on their iPad,” she said. “It’s more challenging for us adults. Today’s kids are smarter than us when it comes to technology.”

A big advantage of the Chromebook is that it operates on the school system’s server.

“That gives us some control over what they can get off the internet,” Sanders said. “It’s a good safety filter.”