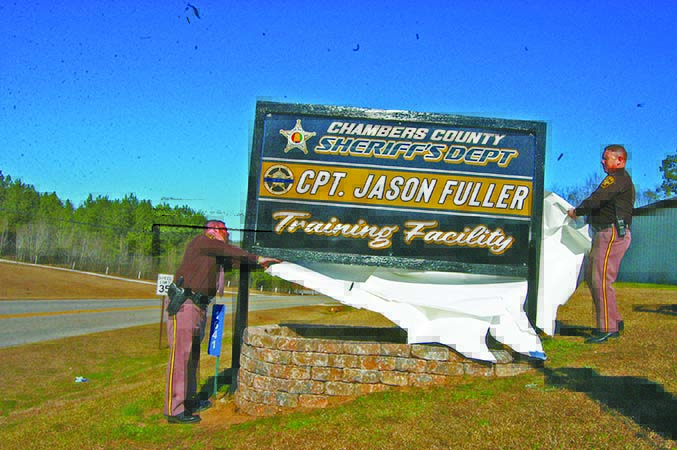 HUGULEY — The Chambers County Sheriff’s Department Training Facility has been renamed in memory of Captain Jason Fuller, who tragically died of natural causes at a young age last year.

The training facility is located in the former Valley Rescue Squad building on Phillips Road near the intersection with Highway 50.

The unveiling of a new sign marking the location took place Thursday afternoon. A large gathering of family members, law enforcement officers and county officials were present for the ceremony.

“It is so fitting that we rename this building for Jason,” Sheriff Sid Lockhart told a crowd gathered at the sign just before the unveiling. “Jason is the kind of individual you just can’t replace. He could do anything; he could fix anything that was broken, and he kept the equipment we have stored here in tip-top running condition.”

The training facility is located in two buildings alongside Phillips Road. A smaller building on the south side has a kitchen, dining area and a training classroom. A larger building to the north is a storage area for sheriff’s department equipment and vehicles.

There’s equipment for a local law enforcement SWAT team and a dive team along with chargers to keep them in running condition. Among the vehicles kept there is the sheriff’s office meth hearse, the hot pink Camaro named in honor of Megan Bonner and a motorcycle.

“Jason wore a lot of hats when he was with us,” Lockhart said. “He kept everything in this building charged up all the time. If you needed a tool that was stored somewhere in the building, he was the one person who could go right to where it was and get it for you. He was so dependable in many ways. He helped us with fundraisers, helped me with cooking and if we ever needed someone to go out of state for surplus equipment we could always count on him. There were times he would go to Texas or Florida if we needed him to. We all loved Jason. He was like a brother to us all.”

The sheriff commended Jason Hudson of All Star Graphics for doing great work on the new sign. The framing and the background are black. There are images of sheriff’s department badges on the left side. Most of the lettering is in white on gold backgrounds. It’s worth a drive on Phillips Road to see it. Chief Deputy Richard Carter and Major T.J. Wood did the unveiling.

There was some applause and cheering when people saw it for the first time.

“I want to thank everyone for coming out to this great event,” Lockhart said.