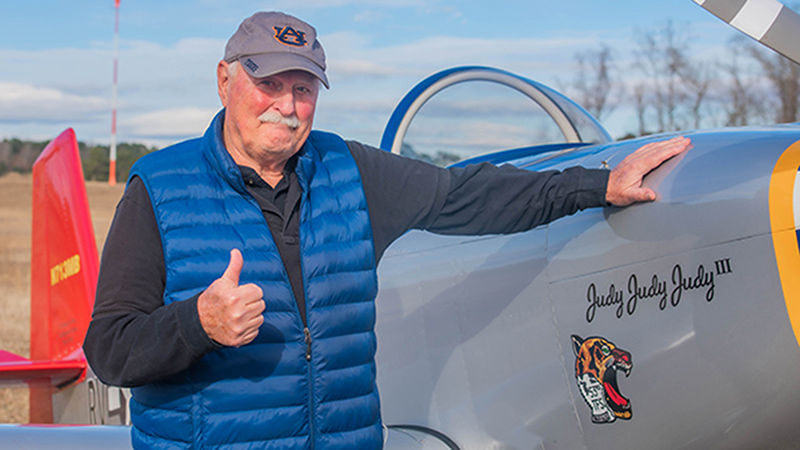 In recognition of a high-flying career, Auburn alumnus and aviator Mike Ballard was honored Wednesday with the Wright Brothers Master Pilot Award during a special ceremony at the Auburn University Regional Airport.

The award is the most prestigious distinction offered by the Federal Aviation Administration, or FAA, to licensed pilots. To be eligible, candidates must have exhibited exemplary aviation expertise, distinguished professionalism and steadfast commitment over a career of at least 50 years. Ballard was presented the award in surprise fashion Wednesday in front of family, friends and others. He was nominated for the award by his son Nathan, who is also a pilot.

Ballard was introduced to aviation by his father James, an Army Air Corps flight instructor during World War II. His father took him on a flight that would instill in him a love for flying that has lasted decades, and he has since shared with his wife and son.

Ballard earned his private pilot’s license while in the Air Force ROTC at Auburn University. After graduating from Auburn in 1964, Ballard was commissioned into the Air Force as a second lieutenant, earning his wings in 1966. He served a three-year tour of duty at Bitburg Air Force Base in Germany during the height of the Cold War as a member of the 53rd Tactical Fighter Squadron.

After completing his tour of duty, Ballard flew as a pilot for Delta from 1970 until his retirement in 2002. By the end of his career with Delta, Ballard was completing international flights.

In 1993, while the Ballards were building their house, they asked the builders to make an oversized basement opening to use for building airplanes.

Since then, Ballard and his brother Jimmy, also an Auburn graduate and retired American Airlines pilot, have built four airplanes out of the basement known as the “Ballard Aviation Workshop.”

One of Ballard’s basement-built airplanes, Judy Judy Judy2, an RV-8, was sold to a British citizen who flew the plane over the North Atlantic Ocean.

Ballard and his wife have been members of the retirement learning program Osher Lifelong Learning Institute, or OLLI, at Auburn University for more than six years.

However, he has recently taken a few years off to focus on building airplanes.