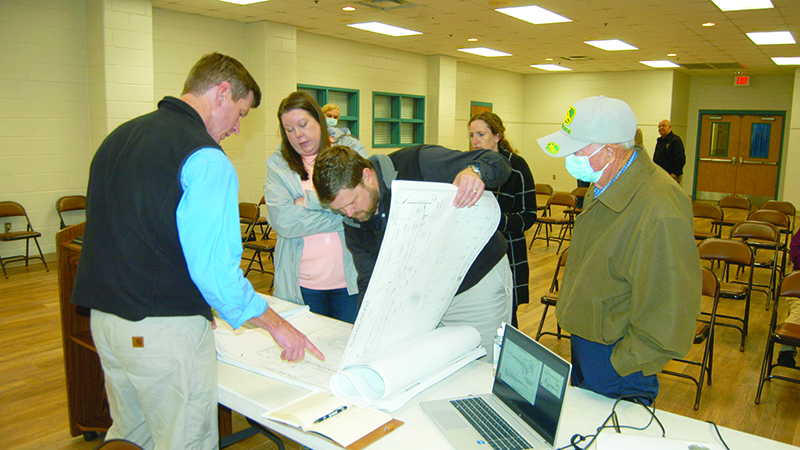 Explaining work to be done — Chambers County Highway Director Josh Harvill (at left) and Assistant Director Daniel Lundy (at center) explain to affected residents how an upcoming project in the Huguley community will take place. Work will soon begin to widen portions of Phillips and Cusseta Roads to add turn lanes at the intersections at the traffic signals. This should relieve traffic congestion in the mornings when children are arriving at Huguley Elementary School and in the afternoons when they are leaving for the day. Photo by Wayne Clark

VALLEY — Chambers County Highway Director Josh Harvill and Assistant Director Daniel Lundy met with residents of the Huguley community Thursday evening to talk with them about the widening of the Phillips Road/Cusseta Road intersection, a project that will get underway in the very near future. The public meeting took place in the Bobby Crowder Room at Valley Community Center.

Among those present were Commission Chair Debra Riley, Commissioners David Eastridge and James Williams and Sheriff Sid Lockhart. Most of the Huguley residents present were people who lived near the construction zone.

Chris Clark Grading & Paving was the low bidder on the project. Harvill said he was pleased a local company will be the prime contractor.

“We have worked with him on many projects,” Harvill said. “That’s good.”

The Alabama Department of Transportation (ALDOT) will be serving as the administrative agent.

It’s not unusual for a 165 working day project to extend for an entire calendar year.

“It will be weather dependent,” Harvill said. “I’m glad Chris got the contract. He has worked well with us in the past.”

Harvill said that when the work starts, the intersection will be a busy work zone with the contractor, subcontractors, surveyors and utility companies on the site from time to time.

Harvill commended Lundy for his hard work on the project.

“Daniel has worked on this for the past six years and has contacted many landowners one on one to discuss what will be taking place,” Harvill said.

He also commended the Chambers County School District for its cooperation. They sold some land to the county near Huguley Elementary School to make way for the road widening.

The school will be a major beneficiary of the project. Traffic studies have indicated that new turn lanes at the traffic signal could create a better traffic flow in the mornings when students are arriving at school and in the afternoons when they are leaving.

“It seems like we have been working on this project for 10 years,” Harvill said. “The school board brought this problem to us. We reached out to Skipper Contracting to do the traffic study.”

Moving utilities took a lot of time to get done. Underground water and gas lines had to be relocated along with above-ground utility lines.

“The school district has been very patient throughout the process,” Harvill said.  “We will be getting to work soon. You will know we are about to start when you see the orange construction zone signs.”

Each side of the intersection will have three 12-foot-wide lanes. Work will take place one lane at a time. When the work is complete on one side of the road, it will start on the opposite side. Getting the first lane done is the critical phase of the project. Two-lane traffic will have to be routed through two 10-foot-wide lanes. This will include some truck traffic headed to West Frazier (Norbord).

Harvill recommends avoiding driving through here if it’s avoidable during this phase of the work.

Both sides of the roads will be widened with seven feet of new asphalt. A large culvert will have to be replaced near the intersection.

Some new storm drains will be going underneath the roads. This part of the work will be taking place on weekends when there’s less travel on the roads.

Curbs and gutters will be going in as well.

One man present for the meeting said he’s already noticed a big improvement in the drainage in the work that’s been done so far.

Harvill said what will be done in Huguley is comparable to what was recently completed on the main road between Sam’s in Auburn and Tiger Town in Opelika.

One person present said there could be a speeding problem on the street behind the school. Speed bumps could be placed there to keep motorists from trying to speed around the intersection that way.

Commissioner David Eastridge said the work to be done is like remodeling a house.

“It can be pretty ugly when you start but will look really nice when you are finished,” he said. “I appreciate the job the people in the highway department are doing for our county.”

“There’s a lot of work to be done,” Harvill said. “Be patient with us. It will be a worthwhile project when we are through with it.”