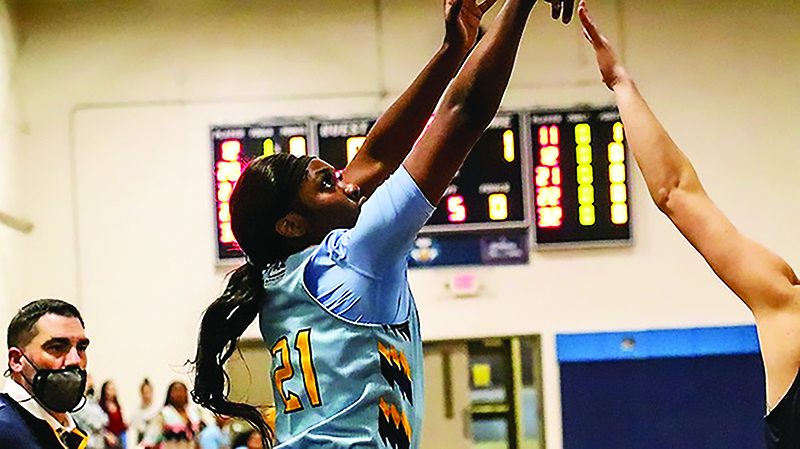 Going up strong: Senior Guard Nicole Izuagie goes up for a shot during Point’s victory over Reinhardt Tuesday. Point improved to 13-3 (9-3 AAC) on the season and take on conference opponent Union at home Saturday, Jan. 22, 2022 at 3:30 p.m. Photo by Roman Jones.

Izuagie finished the evening with a team-high of 19 points, going 5-for-13 from perimeter shooting. She was followed by Marta Gimenez and Iyanna McMillan, who recorded 16 points apiece; Gimenez recorded seven rebounds and eight assists to add to her stat line. Sheyvonne Owens led under the basket with eight boards, adding eight points, and Jasmine Griggs also recorded eight points, tallying on seven rebounds and three assists. Off the bench, Tasha Jackson had eight points, six of which came from the free-throw line, as Jackson was 6-for-6 from behind the charity stripe.

It was an intense battle all game long, as Reinhardt and Point combined for 42 fouls (26 from Reinhardt, 16 from Point), and three members of Reinhardt’s squad fouled out.

The Eagles brought the score back within two entering the second half as they opened with a 5-0 run. McMillan extended Point’s lead out with a 3-pointer, assisted by Griggs to end Reinhardt’s quarter opening run. With 2:42 left before halftime, Reinhardt connected with back-to-back three-pointers to take a 24-22 lead. Point would close the half out on an 8-2 run, beginning with two free throws from Jackson. Ellison would follow with a layup and Jackson would conclude the half with back-to-back trips to the free-throw line, sinking all four shots. Point entered the break leading 30-26.

Reinhardt opened the final quarter on a 10-1 run, bringing the score back within one. Gimenez ended the Eagles’ run with a 3-pointer, but a layup from Haynes and a triple from Reinhardt’s Catherine Shope earned Reinhardt its first lead of the second half (56-55). Over the next two minutes of action, both teams were back-and-forth, with neither earning a larger lead than one. Still, with under five minutes remaining, Izuagie connected for her third 3-pointer of the night and sank another triple a minute later to help the Skyhawks hold its lead.