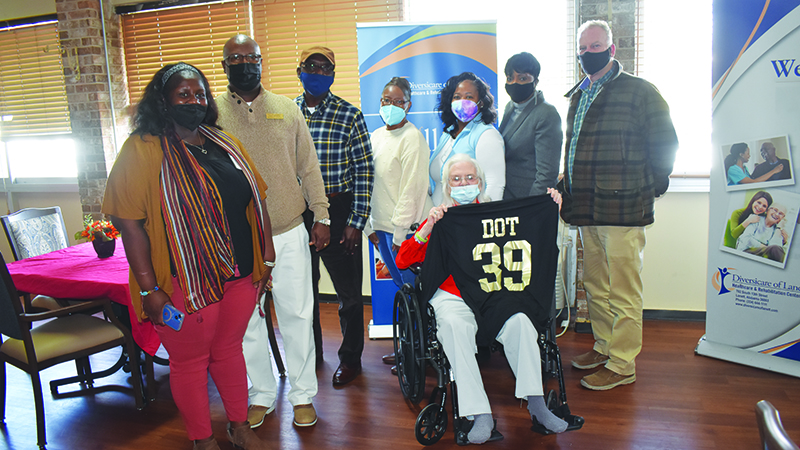 In December, Lanett native and Diversicare of Lanett resident Dorothy “Dot” Allen celebrated her 99th birthday with family members, friends, city officials and Diversicare staff. On that day, she received a Lanett Panthers t-shirt she had asked for.

On Friday, another wish of Allen’s was granted. Lanett Mayor Jamie Heard and West Point Mayor Steve Tramell presented Allen with a long-sleeve jersey with “Lanett Panthers” on the front.

“I have a jersey here I heard she wanted to have, and it says Lanett Panthers,” Tramell said.

Tramell showed Allen and the audience that the back of the jersey had Allen’s name and the number 39 on it. Allen explained that the 39 represented her being a cheerleader at Lanett Junior High School in 1939.

“I wanted the shirt because of what the football team did this year,” she said. “They were so good.”

“Everybody’s going to know who you are now,” Tramell said.

Allen recalled that she had a great birthday party.

“It was [beautiful] with all her friends and decorations, and the food was amazing,” Thornton said.

“So many great people came that I love,” Allen said.

“Your family was here,” Thornton said.

According to Thornton, the numbers and letters on the jersey were added by SewingMachine.com.