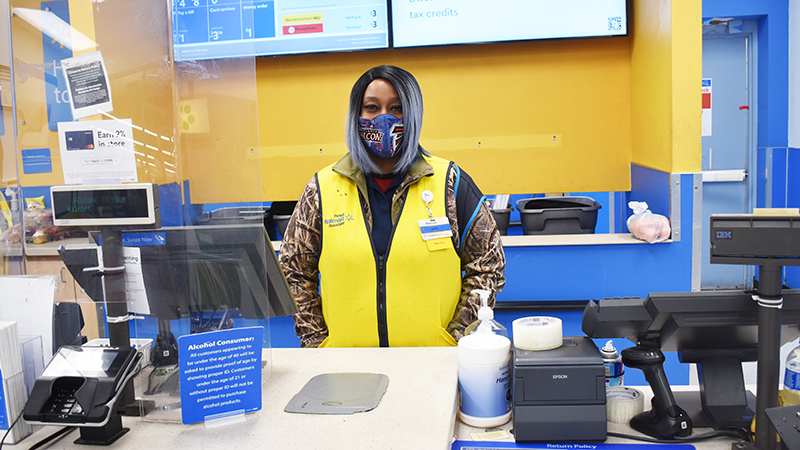 Paying it forward: Valley Walmart employee Casonja Lewis, who was homeless at one time, recently bought a customer’s groceries. She is shown behind the customer service desk. Photo by Cole Trahan.

About a couple of weeks ago, shopper Sharon Straughn felt moved by a scene she witnessed at the Walmart in Valley. She was standing in line behind a service desk when she noticed an elderly man in a wheelchair having a hard time getting his card to work, she said in a Facebook post in the group, Valley & Lanett Chat. An employee told the man, ‘I got this,’ and paid for his groceries, Straughn said.

“She then told me she had already done it a couple times that day!” she exclaimed. “She had no idea that I was going to ask to take her photo and post it.”

Straughn said she thought the world would be much better off with more people like the employee, whose name is Casonja Lewis.

“[H]ope Walmart knows how lucky they are to have her, front of store representing their brand!” Straughn posted.

In an interview, Straughn said the man had about three to four bags of items.

Lewis, who is the store’s front-end team lead, said she couldn’t remember what she paid for the man’s groceries but believed the amount was under $20. She said the man told her he really appreciated the help.

“If I was in that situation, I would want someone to help me out,” Lewis said. “So I feel like I should pay it forward. You know what I’m saying? If I can help someone, then why not?”

Lewis said she has done this before but wasn’t sure how many times.

“If a situation comes up where I have a little extra, and I know I can help someone, I help someone,” she said.

Lewis has been working at the Valley Walmart for a year and said she loves her job because she loves helping people.

She said she tries to be generous outside of work, as well, especially because she knows what it’s like to need something and not be able to get it. Her current job is the first one she got after being homeless.

“I was living out of my car at one point,” she said. “I ended up having to move into my brother’s basement, me and my three kids. So, to go from there to being here, you know what I mean? I’ve been blessed. So, if I can bless someone, I want to bless them.”

Store manager Abby Pool said Lewis is “a very reliable and dependable associate” and that she’s very good with customers.

Pool said she’s aware of Lewis having paid for people’s items about two or three times.

“I love it,” Pool said. “I think that’s what makes the world go round, to be totally honest with you. That’s what we’re about — community and helping.”

Asset protection employee Wendy Birditt said Lewis is her team lead. She described her as fun-loving and said she loves kids. She said Lewis’s act of kindness was “awesome.”

“I think that when people can, we should help each other,” Birditt said. “She could; she did. That’s a good thing.”

Birditt said she thinks most Walmart employees are nice people.

“We do what we can,” she said. “We do our best to be friendly and nice to everybody. And with this pandemic going on, it can be hard sometimes to be what everybody wants you to be and stay nice and friendly and be able to be helpful. It’s nice when you see something like that and you see someone being helpful, especially when somebody needs it.”