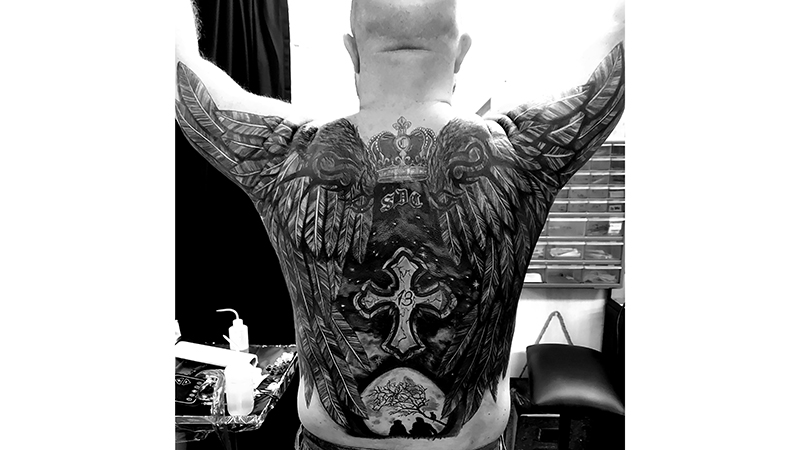 Covered with love: A visitor to Jennifer Adkins’ tattoo shop shows off his new tattoo. Adkins provides a free cover-up service through The Summit Covered with Love Project in Valley. Photo contributed.

Getting a tattoo can be a fun and meaningful mode of self-expression. Unfortunately, it can also lead to regret. For those who don’t like their tattoos anymore or never did, as well as for those with scars, a local project offers them a chance to feel good about how they look.

The Summit Church in Valley and one of its members, Valley-based tattoo artist Jennifer Adkins, have teamed up to establish The Summit Covered with Love Project, which offers to cover tattoos and scars that bring their wearers shame or regret. Nobody pays for the cover-ups; Adkins does them for free.

She said a lot of people in the Valley area have tattoos they regret and have come to her for solutions.

“It was just something that I started working with and [have] been able to turn something kind of ugly into something beautiful,” she said.

The Summit Covered with Love Project started four years ago, she said when pastors Mark Messer and April Walker-Jones approached Adkins about someone they worked with who had been in prison.

“He had a bunch of tattoos that were from being in prison,” Adkins said. “He had joined a gang for protection, and now that he was out of prison, he didn’t need the tattoos that he had gotten while he was in prison. He wanted to cover up the hatred that they represented.”

Adkins said the man, Nate Perryman, has been a big part of her life for the past four years and that she still works with him. She calls him her brother.

She said she would like to see the project grow and more artists get involved. There’s no end date for the project, as the need for it is continuous. Adkins estimated that she’s helped around 75 people so far.

“The way they look at themselves in the mirror when they check out their tattoos is the most amazing thing,” she said.

One of the most inspiring cover-up stories Adkins recalls is that of a breast cancer survivor.

“They had to remove her breasts, and I covered the scars with flowers,” she said. “She was very self-conscious. And her fight, and her battle through, and to win against breast cancer was amazing.”

Adkins said she has done multiple cover-ups for people who made bad tattoo decisions in the throes of addiction.

If you have a scar or tattoo that needs to be covered, or if you know someone you’d like to be considered for a free cover-up, The Summit Covered with Love Project asks that you email the details to coveredwithloveproject@gmail.com.

Covered Tattoo Shop, owned by Adkins, is located at 81 Trammell Block in Valley.