Gamper recognized as Officer of the Quarter 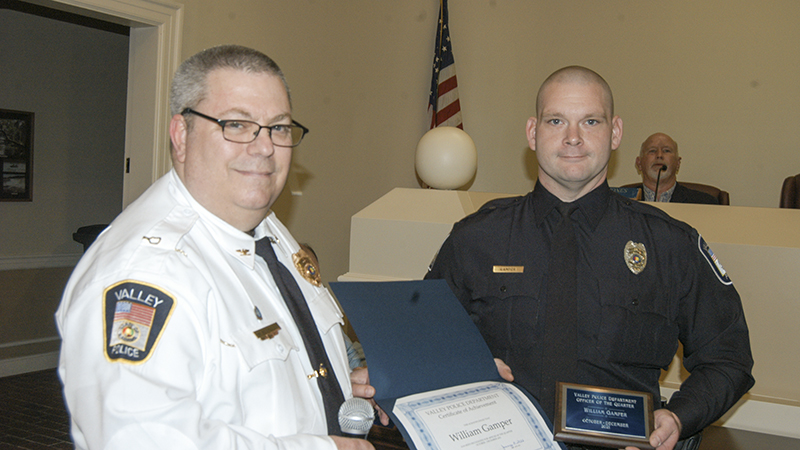 Willam Gamper (at right) was recognized as Valley Police Department’s Officer of the Quarter at Monday evening’s meeting of the Valley City Council. He is shown above receiving a plaque and certificate from Police Chief Mike Reynolds (left). Photo by Wayne Clark.

VALLEY — Two Valley Police Department officers were honored by the Valley City Council on Monday. First-year officer William Gamper was recognized as the Officer of the Quarter, and Sgt. Wayne Hattaway was awarded a badge and service revolver upon his retirement.

Gamper was presented a plaque and certificate by Chief Mike Reynolds for his selection as Officer of the Fall Quarter. Reynolds explained that the award is based on a point system attained from October through December. In placing first, Gamper had a total score of 613. During this period, he answered 285 calls, wrote 38 reports, responded to 13 vehicle accidents, made 272 vehicle stops, wrote 119 citations, issued 79 written warnings and made 85 arrests.

Gamper graduated from the police academy this past spring and has been on patrol since then.

Hathaway had been with the Valley Police Department since 2007. State law allows for law6enforcement officers who were of good standing upon their retirements to receive a badge and service revolver. This applies not only to police officers but also to those who had been employed by the Department of Conservation and Natural Resources, the Alcoholic Beverage Control Board, the State Forestry Commission, the Alabama Criminal Justice Center, the Public Service Commission, campus police or any other state agency that required law enforcement officers who upheld peace officer standards and who were certified by a training commission. As a retirement benefit, the officer gets to keep their badge and pistol.

In other action, Valley Parks and Recreation Director Laurie Blount reported to the council that the Christmas Merry Go Round had recently completed an outstanding season despite missing the last couple of days due to a mechanical problem. A total of 55,669 riders took part in the 60th anniversary year of the merry-go-round.

“For the most part, we had good weather,” Blount said. “We were dealing with COVID last year and had around 46,000 rides. The year before COVID (2019) we had 53,700 rides. We hated missing those last two days, but a center rod had broken on the merry-go-round, and it was too dangerous to ride.”

Blount said that the Community Center will have its holiday hours of 7 a.m. to 4 p.m. EST on Martin Luther King Day on Monday, Jan. 17th.

The council approved an eight-item consent agenda including approval of the use of alcohol at an event planned for Lakeview Cabin on Saturday, Feb. 19. Also approved were some liens on properties that were recently cleaned up by the city. The properties are located on River Road, 31st Street, Highway 29, East Sears Street, California Road and MLK Drive.

Public Works Director Patrick Bolt told the council that his department had recently done some patching work on Williams and School streets and would be doing more such work with good weather.

“We will be planting some trees near the River View boat landing and are open to suggestions about other places in the city where we can plant them,” he said.

Bolt said that tree planting would be taking place in February as part of a Tree City Arbor Day observance.

Mayor Leonard Riley asked for local citizens to keep Council Member Randall Maddux in their thoughts and prayers. He recently suffered a health setback and was scheduled for surgery at the East Alabama Medical Center on Tuesday.

In the opening prayer before the council meeting, Council Member Jimmy Gilson called on others to be praying for Maddux and for him to have a quick recovery.