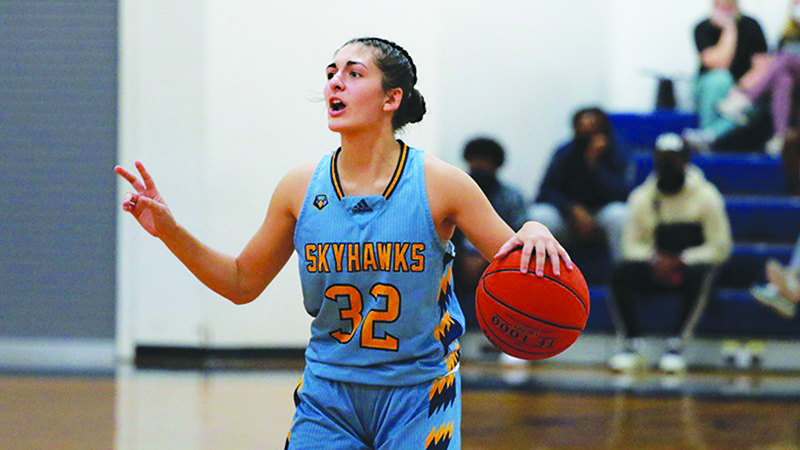 Gimenez finished with a team-high 17 points, 12 rebounds, and a game-high 11 assists. Sheyvonne Owens recorded a double-double with a game-high 16 rebounds and 11 points. Hannah Williams, who played the entire 40 minutes, finished alongside Gimenez with a team-high of 17 points, and Iyanna McMillan was the final Skyhawk in double-figure scoring with 16 points. Nicole Izuagie nearly found her way into the double-digit scoring column, finishing with nine points, all coming from perimeter shooting.

“We had tremendous guard play tonight with Marta setting the tempo for our team,” Head Coach Tory Wooley said. “She is the first player to record a triple-double since we joined the NAIA. That’s a testament to her hard work and the kind of teammate she is. She did an outstanding job getting her teammates involved and generating offense for herself. We got great contributions from Hannah and Iyanna on both sides of the ball as Shey dominated the interior with 16 rebounds and did a great job running the floor. We played solid defense against a very solid, and well-coached Johnson team.”

It was a slow start to Thursday’s matchup, as neither team made it into double-digit scoring until back-to-back triples from McMillan would give the Skyhawks a 13-4 lead with less than three minutes remaining in the quarter.

Izuagie would open the second quarter with back-to-back 3-pointers to extend Point’s lead out 19-6 before an 8-0 run by Johnson would cut Point’s lead down 19-14. A triple from Gimenez, followed by a layup from Owens with less than a minute left before halftime, would regain a double-digit lead for Point, and the Skyhawks would enter the second half leading 28-17.

The Royals came out of the break with heavy momentum as they cut Point’s lead down to four with less than four minutes remaining in the third quarter. Back-to-back free throws from Owens, followed by a 3-pointer from Gimenez, extended Point’s lead back to nine, and back-to-back layups from Williams would help Point take a 49-38 lead with a minute remaining in the quarter. A layup right before the buzzer from Johnson’s Tori Teesateskie would cut Point’s lead down to nine entering the final quarter (49-40).

Johnson got hot behind the 3-point line in the fourth quarter, connecting for four triples to threaten Point’s lead, but the Skyhawks outscored the Royals 23-19 in the final frame to earn the victory.