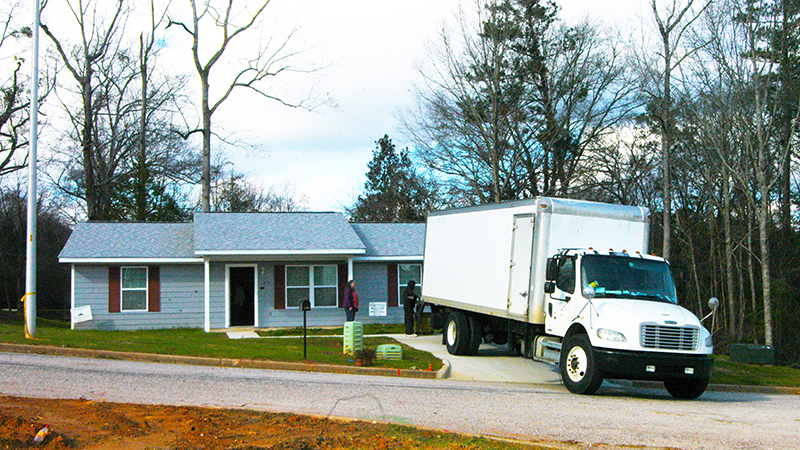 Furniture for veteran: High Socks for Hope sent a big truck filled with new furniture to West Point on Wednesday. It was donated to help a veteran who is moving into a new home on Higgins Street. The new house was built by the Chattahoochee Fuller Center Project (CFCP) this fall. The new furnishings will enable 14-year Army veteran Rita Rowland and 13-year-old granddaughter Kennedy Rowland to move in. Photo by Wayne Clark.

On Wednesday, that new home was furnished with furniture courtesy of Tuscaloosa-based High Socks for Hope.

During the noon hour, a Freightliner truck arrived from a High Socks for Hope warehouse in Dothan filled with new bedroom and living room suites along with bathroom furnishings and a Tempur-Pedic smart bed. It automatically adjusts while you sleep.

What happened Wednesday is a case of Christmas coming a little late and a birthday present coming early.

Rowland lives with her granddaughter Kennedy, who will be having her 13th birthday this weekend. She’s a seventh grade student at Long Cane Middle School.

Rowland was overjoyed to see all this first-rate new furniture coming into her new home. Almost at a loss for words, she said she was more than grateful to see this day.

“I am so thankful to have people helping me and my granddaughter,” she said.

High Socks for Hope is a 501(c)3 nonprofit founded in 2011 by major league baseball pitcher David Robertson. He created it in response to the April 27, 2011, tornado outbreak that killed 64 people and injured 1,500 more in Tuscaloosa. More than 250 Alabamians lost their lives that day in one of the worst tornado outbreaks in U.S. history.

Robertson was then a relief pitcher for the New York Yankees and was inspired to do what he could to bring relief to residents of his home state that needed it. Robertson and his wife, Erin,  founded a relief organization and called it High Socks for Hope after David’s fondness for wearing high socks while playing baseball.

It was initially founded to help the tornado victims but has since expanded throughout the Southeast. It’s now in 13 states, helping natural disaster victims and homeless veterans by moving them into furnished homes. Since 2011, the organization has provided relief for thousands of families, including survivors of Hurricanes Sandy, Harvey, Florence, Laura and Michael. In 2021, they furnished more than 250 homes in flood-devastated Waverly, Tennessee and have more recently been in western Kentucky helping those who lost their homes to devastating tornadoes.

A native of Birmingham, Robertson has pitched in the major leagues since 2008. At one point in his career, he was the set-up man for Yankee closer Mariano Riviera, one of the best pitchers in baseball history. He had also pitched for the Chicago White Sox, Philadelphia Phillies and the Tampa Bay Rays. He pitched in college at the University of Alabama.

Judy Holland, the managing director for High Socks for Hope, accompanied a work crew on Wednesday’s delivery. “We have done a lot of work for the Fuller Center,” she said. “I met (CFCP Executive Director) Kim Roberts after the Beauregard tornado in 2019. We helped furnish 27 homes in the Beauregard area that year.”

Roberts recently contacted her to see if High Socks for Hope could help furnish Rowland’s new home. Since she’s an Army veteran in need they could.

“All the furniture we provide is new and has been donated to us,” Holland said. “We want to treat storm victims and veterans in need the right way.”

In many cases, homeless veterans sleep on mattresses they found while dumpster diving. Most of those mattresses have bedbugs and other pests, making for an unhealthy living arrangement.

Holland said it has been an amazing experience working with High Socks for Hope.

“It’s like being on an HGTV program every day,” she said. “It has been wonderful to have helped so many people. Coach Nick and Terry Saban are two of our biggest supporters. They have built 18 National Championship houses. If they beat Georgia on Monday, we will be getting a nineteenth one.”

Wednesday’s work crew included Bill and Brenda Lindstrom of Dothan. Bill retired before COVID and has been a dedicated worker along with Brenda.

“They have been with us for 13 months,” Holland said. “The Lindstroms have helped us a lot. We appreciate them.”

Holland said that Robertson’s baseball career taught him what it was like to start over every year.

“Because he plays pro baseball, he moves around a lot,” Holland said. “He often has to get a place to stay and furniture to go in it. He knows what people have to go through when they have to start all over after a disaster.”

In the first year for High Socks for Hope, the organization furnished more than 350 storm-damaged homes in the Tuscaloosa area.

“At first, we thought it would be a temporary effort to help victims of the 2011 tornadoes,” Holland said, “but we are still helping people eleven years later. It has been such a rewarding experience. We are excited to be here in West Point today helping an Army veteran. We are starting off 2022 on a high note.”

In the western Kentucky region, High Socks for Hope has been helping people in rural areas.

“We want to make sure they won’t be forgotten about,” Holland said.