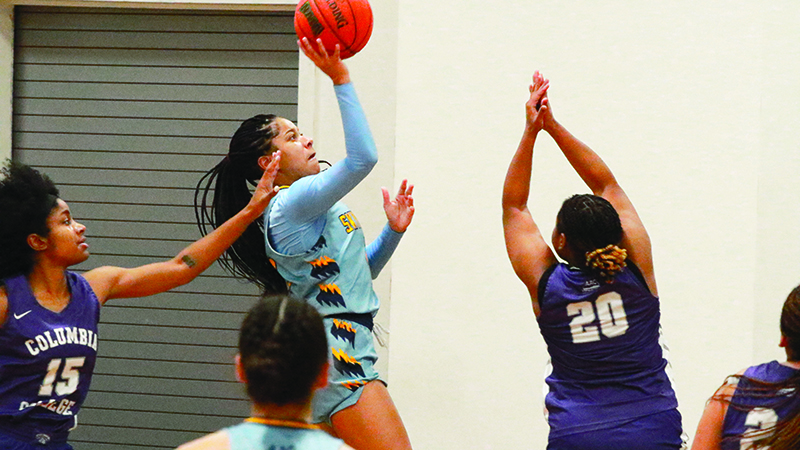 Floating one in: A Point University player puts up a shot during the Skyhawks 91-59 rout of Columbia College Thursday. Photo by Theseus Jackson.

The Skyhawks opened the contest by limiting the Koalas to only 12 points and scoring 25 in the opening period. With four minutes remaining in the quarter, the Skyhawks led 12-8 before scoring 13 points in the final minutes to extend its lead out to double figures. Nicole Izuagie connected for 12 of the Skyhawks’ points, all from behind the 3-point arc.

In the second half, Point limited the Koalas to scoring 15 points each quarter, while the Skyhawks scored 28 points in the third quarter and 20 in the fourth.

Every Point player who entered the game made their way into the scoring column, with Iyanna McMillan leading the way with 20 points going 8-for-15 from the field and 4-for-6 behind the three-point arc. Izuagie followed close behind with 18 points, all from perimeter shooting. Owens followed with a double-double, scoring 11 points and recording 14 rebounds and Hannah Williams was next in the scoring column with 11 points. Destinee Ellison followed with eight points and Marta Gimenez recorded seven points, eight assists and six rebounds. Ansley Miranda recorded six points, Kyra Hart had five, Jasmine Griggs had four and Tasha Jackson scored one point and recorded four rebounds.

Up next, the Skyhawks are scheduled to travel to Kentucky Christian University on Saturday, Jan. 8, for an AAC matchup at 2 p.m.