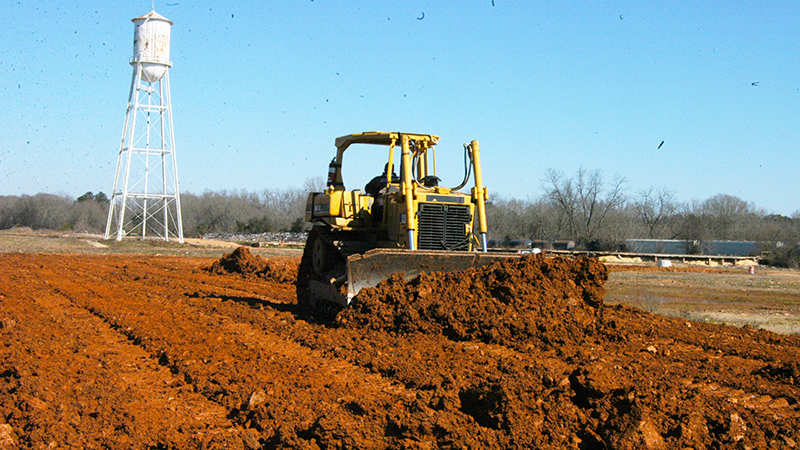 Erosion control: Fresh dirt has been going down on the Lanett Mill site between Tractor Supply and a culvert that cuts across the property toward the Chattahoochee River. This is being done to keep a potential erosion problem from getting worse. Photo by Wayne Clark.

LANETT — Some dirt has been hauled in and some grading is taking place on the Lanett Mill site to head off a potential erosion problem.

Chris Busby of the Chambers County Development Authority (CCDA) said the work is routine maintenance to keep the problem from worsening. There is a culvert that cuts across the site not far from Tractor Supply. An extra layer of compacted soil between Tractor Supply and the culvert could keep this potential problem from damaging the water flow off the site.

The CCDA is continually marketing the 25-acre mill site for future development. The new Tractor Supply store opened on the site a couple of years ago. On the opposite end of the site is the AMEA/City of Lanett Solar Research Project, a cooperative effort on the part of the Alabama Municipal Electric Authority and its member entities to generate solar energy that goes on the power grid.

The mill’s water tower and the nickel bus station have remained on the site as icons of the area’s textile heritage. Before Highway 29 was four-laned in the late 1940s, the CV railway ran in front of Lanett Mill. A train station was built for mill workers to be sheltered on rainy days while they waited for a passenger train to take them closer to their home. At one time, the CV rain two battery-powered cars that could carry more than 50 passengers at a time. People called them nickel buses because it cost a nickel to ride. In those days, one could ride a train from West Point to River View for five cents.

Something that could help develop the mill site is for the city to get a Brownfields grant to clean up the broken brick, concrete and rotten wood that’s been pushed to the back of the site.

“We are working with the city to apply for a grant,” Busby said. “Our goal is to have this hauled to a landfill.”

This City of Valley has had several successful Brownfield projects to clean up mill sites in the city. Brownfield grants helped with cleanups at Riverdale, Langdale and Fairfax mills.

Administered by the Environmental Protection Agency (EPA), the Brownfields program provides grants and technical assistance to communities and states to assess, safely clean up and sustainably reuse properties that may have been contaminated in some way.

“We would have to test everything to see if there is any hazardous material in the debris that’s still there,” Busby said. “If not, the material could be taken to a nearby landfill. If there is some such material there, it will have to go to a special kind of landfill like the one in Salem.”

Debris on some mill sites has been known to have minute amounts of asbestos and petroleum remnants.

The Brownfields program has been very successful in cleaning up abandoned sites and returning them to a new, productive use. In the last 15 years, an annual average of more than 35,000 sites are enrolled in a cleanup effort. Since 2006, more than 200,000 sites have been cleaned up in the U.S. and more than 3.3 million acres readied for reuse.