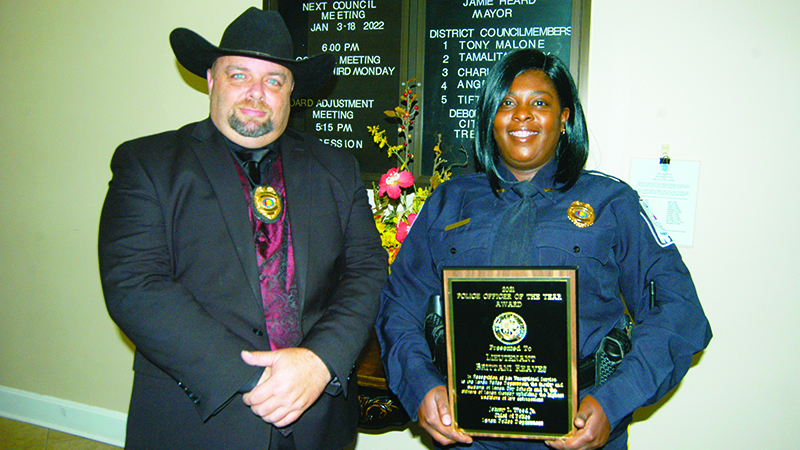 Officer of the year: Lt. Brittani Reaves (at right) has been named the Lanett Police Department’s Officer of the Year for 2021. Chief Johnny Wood (at left) made the announcement and presented her a plaque at Monday’s meeting of the Lanett City Council. Photo by Wayne Clark.

Brittani Reaves received the award at the Monday meeting of the Lanett City Council.

In presenting the award, Lanett Police Chief Johnny Wood said Lt. Reaves is seen as a positive, influential role model by everyone who knows her.

“It is an honor to announce her as this year’s recipient,” he said. “I present her this award to recognize her exceptional service to the Lanett Police Department, the faculty and students of Lanett City Schools and the citizens of Lanett thereby upholding the highest traditions of law enforcement.”

She received a standing ovation from Mayor Jamie Heard, members of the city council and a large crowd in attendance in the council chamber.

Heard said that he had worked with Lt. Reaves when he was the principal at W.O. Lance Elementary School.

“She is skilled with working with both students at their parents,” he said.

Council Member Angelia Thomas said she had heard many good things about Reaves.

“From all I have heard, she is well liked by the students,” she said. “I appreciate her hard work on behalf of the students, parents, the school system and community.”

Reaves has been with the Lanett Police Department since 2011.

“She has made a remarkable difference in the lives of many people,” Wood said in announcing her as the 2021 winner. “This award is a true testament to her hard work, the trust she is able to build among colleagues, school faculty, students and the community. She is dedicated to duty, educating young people in such vital areas as cyber safety, drugs and alcohol, personal safety, community and the role of police. Lt. Reaves continues to contribute to ensuring a brighter future for our young citizens.”

Reaves received some good news in that she’s getting some needed help. Sgt. Alvin McCarley has been assigned to the role of being a second school resource officer. He was among a host of police department promotions that were announced on Monday.