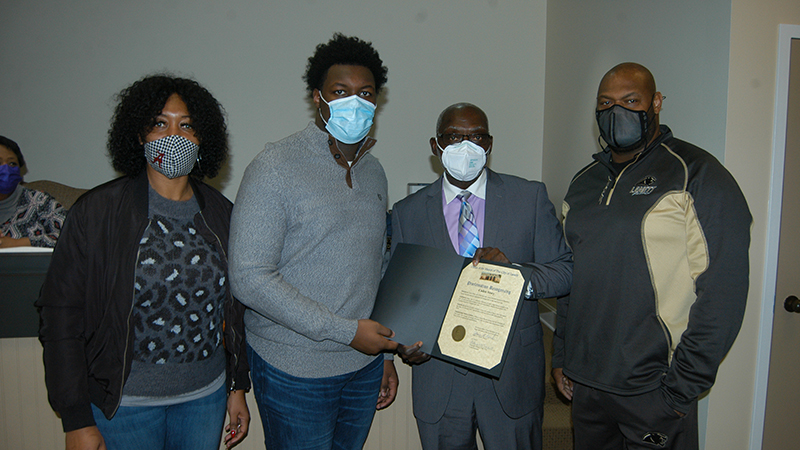 LANETT — Lanett High star football player Caden Story has been honored by the Lanett City Council on having been named the Alabama Class 2A Lineman of the Year.

Caden was present with his parents, Clifford and Krisse Story, at Monday’s council meeting and received a proclamation from Mayor Jamie Heard commending him for his achievements.

Unanimously approved by the council, the proclamation recognizes him as one of the best high school players in Alabama and being much deserving of the statewide awards he has received.

Known to his friends as “Pop,” Caden recently received the 2A Lineman of the Year award at the Alabama Sports Writers Association’s 2021 Mr. Football banquet in Montgomery. Older brother Kristian Story was the state’s Mr. Football in 2019. He’s presently at the University of Alabama.

“The City of Lanett is very proud of Caden Story,”the proclamation reads. “We congratulate him on his exceptional accomplishments.”

“Don’t forget about your Uncle Tif when you are in the NFL,” Dobbs said.

Heard said that for years, Caden’s mom has been like a granddaughter to him. “I am proud of Caden and the Story family,” Heard said. “Thank you, Coach Story, for all you have done for Lanett.”

Council Member Tamalita Autry congratulated Caden and his family on what he and the Panthers accomplished this year. “Allow me to call you Pop,” she said. “The sky is the limit for you. We congratulate you, your teammates and Lanett High on the season you had in 2021.”

Three of Clifford and Krisse’s sons, Tre, Kristian and Caden, played big roles in Lanett High having had championship-caliber teams over the past six years.

At six-foot-four and 275 pounds, Caden is easily the biggest of the three sons. He has been recruited by a host of major college football programs. In August, he committed to Auburn but recently reopened his recruitment to consider several other major schools. He’s still considering Auburn along with Clemson, Central Florida and Florida.