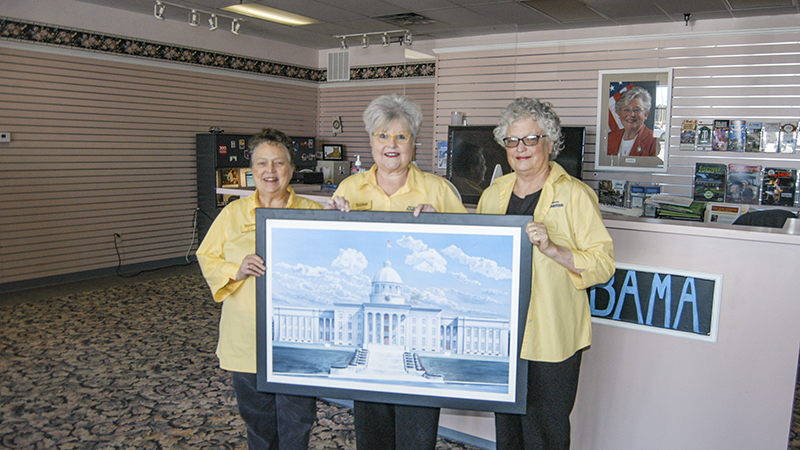 Alabama Welcome Center staff, from left, Director Laura Smith, Melinda Edwards and Linda Adams will be back at the Lanett center this Friday when it officially opens to the public. Photo by Wayne Clark.

LANETT — A 10 a.m. EST ribbon cutting is set for Friday morning to officially open the new Alabama Welcome Center between Exits 79 and 77 on I-85. Alabama Gov. Kay Ivey is expected to be in attendance.

When the original center opened in 1977, Gov. George Wallace was present for a ceremony that was highlighted by a flyover of jets.

For more than two years now, a temporary visitor center has been located in an empty store space in the USA Town Center located off Exit 62 in Opelika.

“It hasn’t been that bad to have been here,” said Welcome Center Manager Laura Smith. “It’s less than 20 miles from our old center. At one time, they were talking about having a temporary center at the rest stop near Tuskegee. That would have been much farther away for us.”

Smith and staff members Melinda Edwards and Linda Adams are from the Valley area. It would have created a hardship of sorts for them to have to travel to Tuskegee and back five days every week. The U.S. 280 exit in Opelika was much easier for them.

“We are really excited about being in the new center,” Smith said. “It has been a long time coming.”

The 2020 COVID-19 shutdown and construction delays caused by rainy weather pushed the completion date further back than expected. Doing it right was probably worth the wait. The hope is new arrivals to Alabama will be impressed by the spaciousness and visitor-friendly atmosphere of the new center.

The bathroom areas will be much improved over what was in the old center. Both the men’s and women’s restrooms will be handicap accessible and have eight stalls.

Being in Opelika for the past two years has not been a bad experience. “The people at the USA Town Center couldn’t have treated us any better,” Smith said. “We appreciate that. We felt very safe here.”

There weren’t nearly as many daily visitations as there had been at the old center, which was just off the Interstate.

“That’s common for temporary centers,” Smith said. “The welcome center off I-10 in Grand Bay, Alabama is the most visited one in Alabama. A new center was recently built in that location. They didn’t get many daily visitors in the temporary center but are getting worlds of them now.”

The Grand Bay Welcome Center is just inside the Mississippi line on the heavily traveled portion of I-10 between Mobile and New Orleans.

Smith has been at the Lanett Welcome Center for more than 35 years now.

“The Good Lord willing, I will have been at the Lanett Center for 36 years this coming April 12th,” she said.

The new center’s concession area will be just across from the information desk. It will be larger with a greater selection items and being indoors will be a plus for visitors 0n bad weather days.

Some of the outside features will be the same as what was at the old center.

“We will have picnic tables and the dog walks,” Smith said.

Anywhere between 1,000 and 2,000 people stopped on a typical day at the old center. It’s expected to be at least that when the new one opens. The State of Alabama is making a major investment in this nice, new building. It’s also partnering with local governments to have better lighting along the interstate at night. All of Exit 79 and the south-bound portion of I-85 that runs from the Chattahoochee River to the new visitor center will be getting new LED lighting in 2022. Bids on this project will be let in February.