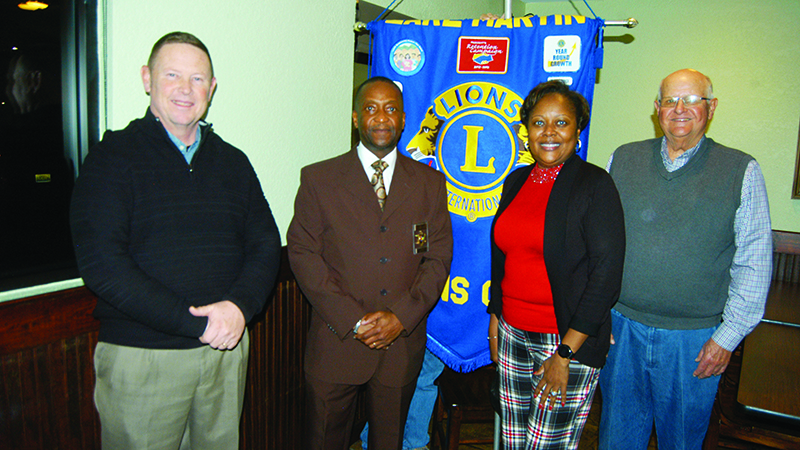 Lions Club program — Captain Robert Chambers (second from left) talked about his experiences in drug enforcement at Monday’s meeting of the Valley Lions Club. He was accompanied by his wife, Chambers County Manager Regina Chambers. Showing their support for Chambers and the work being done by the Chambers County Drug Task Force were Chief Deputy Richard Carter (far left) and Commissioner Sam Bradford (far right), who is a Lions Club member. Photo by Wayne Clark.

VALLEY — On Monday evening, Robert Chambers talked about an evolution he has seen in the illegal drug trade in the more than 35 years he has been trying to stop it.

Chambers was the guest speaker at a meeting of the Valley Lions Club. He has been a public servant since starting out with the East Alabama Fire Department in the early 1980s.

“Sid Lockhart used to talk to me about going into law enforcement,” he said. “I got into it when I joined the Lanett Police Department in 1983.”

Lockhart was one of the first officers with the Valley Police Department when it got started in 1981. He will be retiring as Chambers County sheriff next January after nearly a quarter-century in that position.

In 1988 Chambers was hired as a drug enforcement agent for the State of Alabama. He worked there for several years before becoming part of former Gov. Don Siegelman’s security team. He then went back into drug enforcement and in 2004 was promoted to head the narcotics division. He retired from that position in 2008 and then took a position heading up the multi-jurisdictional drug task force.

“It’s coming here either from Montgomery or from Georgia,” he said.

When an undercover officer works the street and asks for crack he can’t find it, but there’s no problem with finding powder cocaine, marijuana and especially meth.

Something there was plenty of not too many years ago but is disappearing is the meth lab. Drug users had rather buy it now than try to make it.

The homemade kind of meth is extremely dangerous.

“You can overdose on it before you know it,” Chambers said. “Any time we’d go into a house where it was being made, we would wear gloves. It was that deadly.”

Chambers said the big problem today is meth and prescription drugs. Fentanyl is especially dangerous, especially when it’s sold on the street as oxycodone.

“When you take it like it’s oxycodone, it can bust your heart,” Chambers said.

GHB is another dangerous drug out there. Gamma Hydroxybutyrate (GHB) is better known as the date rape drug. It’s sometimes known as “the club drug” because it’s often found in dance clubs, concerts, bars and parties.

Chambers said that in many cases, drug dealers are habitual violators.

“It seems like we are arresting the same people over and over again,” he said. “We arrested one guy five different times for trafficking. In many cases, when they get released they go right back to doing what they were doing before. I caught one guy who had just gotten out of jail. He was driving a car. I knew he didn’t have a license, but he was out on the street and back to his old habits.”

Chambers said it takes a special person to be a drug agent.

“You spend lots of time away from your home and your family,” he said. “You sometimes disguise yourself to look like someone who runs the streets. I did undercover work for six years. I came home once and my little girl hadn’t seen me for so long she didn’t recognize me. She was asking my wife who I was. I knew then I was spending too much time away from home.”

Chambers County has a new drug dog. His name is Peoria and he cost $20,000. Lawrence Howell is his handler. He’s the long-time handler for Goose, who’s about to be retired.

Something lawbreakers should know about the new dog — he’s allowed to bite.