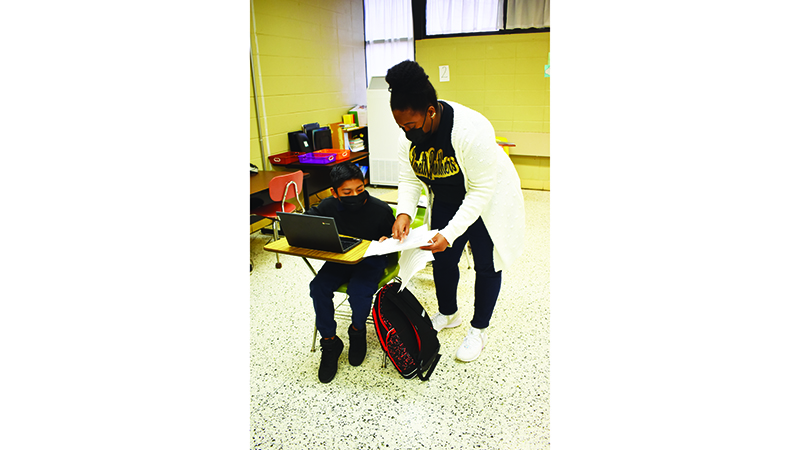 Teacher of the year: ESL teacher Ciara Lyles goes over an assignment with student Antonio Martinez. Photo by Cole Trahan.

Ciara Lyles, who teaches English as a second language at Lanett Junior High School and Lanett High School, was surprised to find out at a staff meeting that she had been chosen as Lanett High School’s teacher of the year. Lyles believes she was chosen because of how she helps her students not only succeed academically but get acclimated to life at an American school.

“A lot of our students come from different backgrounds, or sometimes this is their first school in the states, or they have disrupted education,” she said. “So maybe they didn’t go to school for five or six or seven years. And so legally, we have to put them in their grade according to their age but also credit. So, it’s a bit hard for them, you know, if they’re 16 but they’re in the ninth grade and the last time they were in school was when they were six years old.”

Lyles said the way Lanett Junior Senior High School runs may be different from how a school in a student’s home country ran. Some of her students have to get used to using computers.

“I really try to help them in all aspects, not just focusing on academia because I do feel like it’ll be more effective to assist them with their daily lives and the way they’re going to be communicating,” she said.

Most of Lyles’ students speak a form or certain degree of Spanish, but sometimes it’s not their first language. Some of them speak Mixteco, she said, which is spoken largely in Mexico.

Lyles, herself speaks three languages — English, Spanish and Korean. She speaks Spanish at an intermediate level, having studied the language in high school and taken it as a minor in college. She said she her Spanish is better than her Korean.

“I lived in Korea for about four and a half years, and I taught ESL there,” she said. “So, while I was there, I learned Korean.”

Lyles said she ended up in Korea because of a friend.

“I was trying to bond with one of my roommates, and she really liked watching different kinds of shows and dramas, and she was watching a Korean drama,” she said. “And that was the catalyst. So, I’d watch it with her, and then it kind of expanded, and I wanted to try Korean food. And I wanted to try learning Korean, and then I went to a job fair my senior year, and they had different English teaching programs there.”

One of the programs was the one that brought Lyles to Korea.

“And then they would also take you on cultural trips to show you the culture and have us experience things,” she said. “And so, I told my friends about it, and then a friend of a friend heard about it and was like, ‘Hey, I heard you’re going to Korea. I’m trying to go in February. We should go together.’”

Her favorite thing about her job is her students. She enjoys interacting with them, getting to know them and educating them.

What makes her teaching style special, she thinks, might be that it’s collaborative. She describes her classroom environment as nontraditional and very active.

“I feel like it’s important to collaborate and not just to… I don’t enjoy, like, lecturing,” she said. “When you’re teaching and you just lecture, you’re talking at the students. I don’t like that. I very much like for it to be a collaborative environment, so they give me feedback and then we continue based on the feedback I receive.”

This past week, Lyles’ students read an excerpt about Martin Luther King, Jr. She said the assignment for it was supposed to last only one day but ended up expanding.

“This is now our third or fourth day,” she said.

One of Lyles’ students dreams of being an English teacher, so she sometimes corrects others’ English.

Lyles has been teaching for about seven years. After teaching in Korea, she taught English language arts in Seale, Alabama. She started teaching at Lanett Junior Senior High in August 2021.

Before Lyles was a teacher, she worked as a human resources assistant and then worked at a childcare center, where she taught Spanish.

Lyles earned a BA degree from George Mason University in 2013. Her major was English with a concentration in rhetoric and nonfiction writing. Her minor was in Spanish.

“And currently, I’m pursuing my master’s degree at University of West Alabama for my secondary education for English language arts and my certification,” she said.