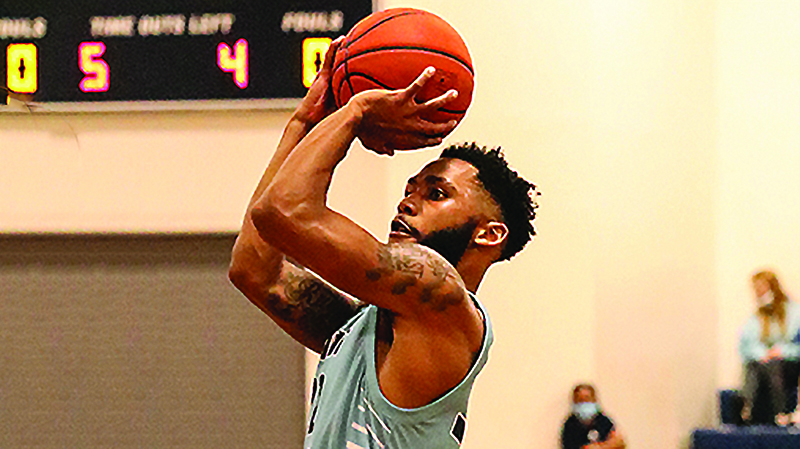 Focused: Point University’s Lorenzo Freeman Jr. pulls up for a shot as the Skyhawks rallied from an 11 point halftime deficit to beat Reinhardt 71-57 Wednesday night. Point improves to 10-12 (6-10 AAC). Next up, the Skyhawks travel to St. Andrews. Photo by Point University.

WALESKA, Georgia. (Jan. 26, 2022) – The Point University women’s basketball team trailed by 11 points entering the final quarter of Wednesday night’s Appalachian Athletic Conference matchup against in-state rival Reinhardt, but a 15-4 run would tie the score at 63, and Point would go on to defeat Reinhardt 70-68.

“Today, we talked about adversity and how it does not build character, but it reveals it,” Head Coach Tory Wooley said. “I’m proud of how our ladies stayed together through adversity and beat a great team on the road. It’s a testimony of our players’ character to compete when down by almost 20 points. We had great production from our bench, and our four seniors (Nicole, Iyanna, Marta and Tasha) led us to victory.”

The Eagles took a demanding 20-8 lead after the first quarter, and the Skyhawks were able to pick up their offensive efforts in the second quarter by scoring 25 points, but Reinhardt scored 24 points in the second quarter, and Point trailed by 11 at the half (44-33). Both teams scored 15 points apiece in the third quarter before Point turned it on in the fourth quarter, outscoring the Eagles 22-9.

Nicole Izuagie began Point’s comeback with a 3-pointer to start the quarter. With 5:30 remaining in the game, Izuagie scored another triple and a little over a minute later, Iyanna McMillan scored a 3-pointer, cutting Reinhardt’s lead down to three (63-60). McMillan would connect for another 3-pointer to the game and a free throw from Hannah Williams would earn Point its first lead of the night with 2:27 remaining.

With 22 seconds remaining, Reinhardt tied the score at 68, following a free throw from Abi Haynes, but a Reinhardt foul with three seconds remaining would send Williams to the free throw line, where she would sink both shots to give Point a two-point lead. The Eagles would attempt a game-winning 3-pointer at the buzzer, but Reinhardt’s efforts fell short, and the Skyhawks walked away victorious.

McMillan had a game-high of 22 points, going 8-for-19 from the field, 3-for-7 from perimeter shooting, and 3-for-4 from the free throw line. Izuagie followed with 16 points, going 5-for-8, 3-for-6 from the perimeter and 3-for-5 from the free throw line. Marta Gimenez was the last Skyhawk in the double-digit scoring column with 11 points and added four assists to her stat line. Williams recorded nine points and four assists.

The Point University men’s basketball team trailed Reinhardt University by 11 points at halftime but outscored the Eagles 44-19 in the second half to earn a 71-57 comeback victory Wednesday evening in Waleska.

With 14 minutes left in the first half, Point trailed 13-12, but over the next 10 minutes, Reinhardt went on an 18-3 run to jump ahead 33-15. Brent Gaither ended Reinhardt’s run with a 3-pointer followed by a dunk from Gentrell Taylor, a 3-pointer from Ray Reeves, and a layup from Corey Bowen to cut the Eagles’ lead back down to eight (33-25). Reinhardt extended their lead back out to 13, but a jump shot from Reeves would bring it back to 11, entering the second half (38-27).

Out of the break, the Skyhawks opened the second half on an 8-0 run, cutting Reinhardt’s lead down to three (38-35). Reeves sparked Point’s run with a layup, followed by a layup from Jake Smith, a dunk from Taylor and a layup from Bowen. A layup from Reinhardt’s Jalin Wimberly would push the Eagles’ lead out to five, but Reeves would answer with a layup and Lorenzo Freeman Jr. would follow with a triple to tie the game at 40. Reinhardt retook a two-point lead, but Bowen evened it up at 42, before Freeman would connect for another 3-pointer, this time putting the Skyhawks in the lead 45-42, and Reinhardt was unable to regain the lead for the rest of the game.

With less than five minutes remaining in the game, an old-fashioned 3-pointer from Smith, followed by a jump shot from Freeman, would earn the Skyhawks a double-digit lead, 65-55. Freeman would close the game out, scoring a layup and connecting for two free throws and Bowen would earn Point its largest lead with a dunk to end the game.

Freeman scored 21 points (17 coming in the second half) and recorded a double-double with 12 boards. Bowen followed with 15 points and nine rebounds, going 7-for-11 from the field and Reeves rounded out the Skyhawks in double-digits with 11 points, adding on four assists. Smith and Taylor each recorded seven points apiece, Smith tacking on six assists and six rebounds and Taylor recording eight rebounds and two blocks.

In the second half, the Skyhawks shot 50% from the field and took advantage of cold shooting from Reinhardt, as the Eagles were 28% from the field and 1-for-17 from perimeter shooting. With Wednesday’s victory, Point advances to 10-12 (6-10 AAC) and travels to St. Andrews for an AAC matchup Saturday, Jan. 29, at 4 p.m.