Roadwork continues along US Hwy 18 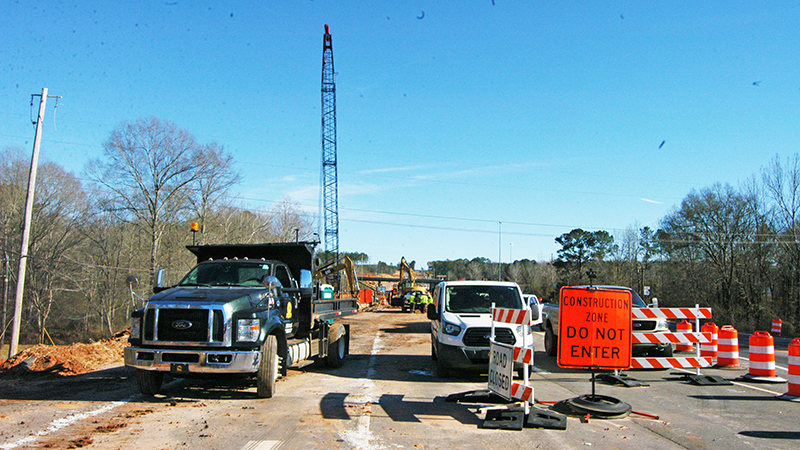 Under construction: Bridge work continues along US Hwy 18 in West Point at I-85 Exit 2. Photo by Wayne Clark.

WEST POINT — Work is underway on a road improvement project on State Route 18 near the interchange with Exit 2 off I-85. The Georgia Department of Transportation (DOT) project involves the replacement of two aging bridges over Long Cane Creek and the installation of three new roundabouts, two at the I-85 interchange and one at the junction of Georgia 103 a short distance away.

Work is underway to widen the shoulders of the road in preparation for the new roundabouts and to replace the bridges. The two-lane bridge for west-bound traffic is being taken out. It will be replaced by a new steel and concrete bridge on the same site. The south-side bridge for east-bound traffic is currently being used for two-way traffic. When the new bridge is completed and ready for traffic, two-way traffic will be directed across it while the other bridge is taken out and replaced.

The present bridges have been there since the interstate opened in 1964 and need to be replaced.

C.W. Matthews Construction of Marietta, Georgia is the primary contractor for the project. Some phases of the work will be done by subcontractors.

C.W. Matthews brings in an estimated $330 million a year in revenue. They do all kinds of highway and bridge construction. One of their more urgent projects in recent years was to rebuild a section of bridge on I-85 in Midtown Atlanta. A section of the long overpass collapsed and had to be quickly rebuilt.

Gene Killeburn is the Georgia DOT project manager for the work being done in West Point.

Given good weather, the new bridges could be finished in one year. A rainy year could force the work to take longer.

Highway engineers are big advocates for roundabouts. They are hailed for improving safety, promoting lower speeds, calming traffic and eliminating the dangerous kind of t-boning accidents that take place at conventional intersections. There’s a learning curve associated with driving in a roundabout, but once the driver becomes familiar with it it’s rather simple. Basically, it’s driving around a circle. It’s better to do this than to have someone run a stop sign and t-bone you going 60 miles per hour.

According to the American Institute for Highway Safety, at intersections where stop signs or traffic signals have been replaced by roundabouts, injuries from traffic accidents have been reduced an estimated 75 percent.