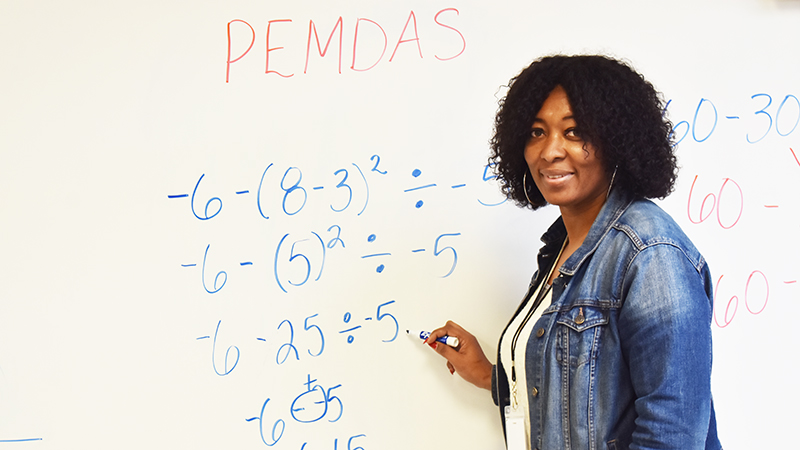 Kristina (Krisse) Pollard Story honestly doesn’t know why she was chosen as Lanett Junior High School’s teacher of the year.

“It’s voted on by our coworkers here at the school, so I’m not exactly sure what their reason was, but I would like to think that it’s because I have compassion,” she said.

What Story does know is that there’s nothing she’d rather do than teach. She has always felt that it was her calling.

Before she was a teacher, Story was a social worker. She said this and her education have molded her teaching style.

“I have a bachelor’s [degree] in psychology and a double minor in sociology, and then I went back for my masters in education,” she said.

Story’s people-focused background has led her to prioritize having good relationships with her students.

If a teacher doesn’t have a relationship with her students, they’ll resist her, Story said.

She believes she has good relationships with her students, so she rarely has to deal with behavioral problems.

Of course, getting close to her students comes with a price. Story misses them after they move on to the next grade. But because of how her school is set up, and because the Lanett community is fairly small, she gets to see former students now and then.

Story said students have said that they feel safe in her classroom. They came up with what they call Therapy Thursday, on which they spend the first few minutes of class discussing whatever they want to talk about without the threat of being judged.

“And if they ask me for my advice, I give it to them,” she said. “But sometimes they just want to talk.”

Story teaches enrichment, a readiness program, to seventh and eighth-graders. She said it prepares students for state tests and life in general.

While Story teaches multiple subjects to her students, she’s mainly focused on reading and math.

Story taught at W. O. Lance Elementary School for two years and has been at Lanett Junior High School for eight years. She said it’s an honor to prepare the next generation of leaders and professionals.

“It’s something that I don’t take lightly,” she said. “And I know some of it probably sounds real cliché, but it’s really in my heart to help mold and build students who eventually are going to be the ones who have to take care of me and make decisions for my life.”

“I may see him once or twice a week [at work] because he’s mostly stationed at the central office,” she said. “So, I don’t see him a whole lot. But it’s fun when we do have the opportunity to be on campus together.”

“I actually fell in love with it,” she said. “I really enjoy it. I’m learning a lot about volleyball.”

Story and her husband have owned The Learning Treasure Preschool in Lanett for 16 years.

She also authored a book called “Married to the Game,” which chronicles her life as a coach’s wife and mother of athletes. She said it describes parallels between marriage and sports.

Story jokingly asked for the meaning of free time.

“I don’t really have a lot of free time,” she said. “I enjoy spending time with my family, which most of my time is with them. Traveling to football games and stuff or visiting school and things like that. I enjoy reading. That’s one of the things I do. And I enjoy writing.”

Story recently got into putting graphics on shirts.

“My son goes to Tuskegee, and they have this intramural football team,” she said. “They have to play on Sunday. So, he called me about making some shirts.”

Story said she plans to sell shirts to her son’s team but only to charge them for the shirts and graphics without making a profit.

“Eventually, I do want to get to a palace where I can sell them, but I’m not there yet,” she said.

Bridges named Teacher of the Year at West Point…