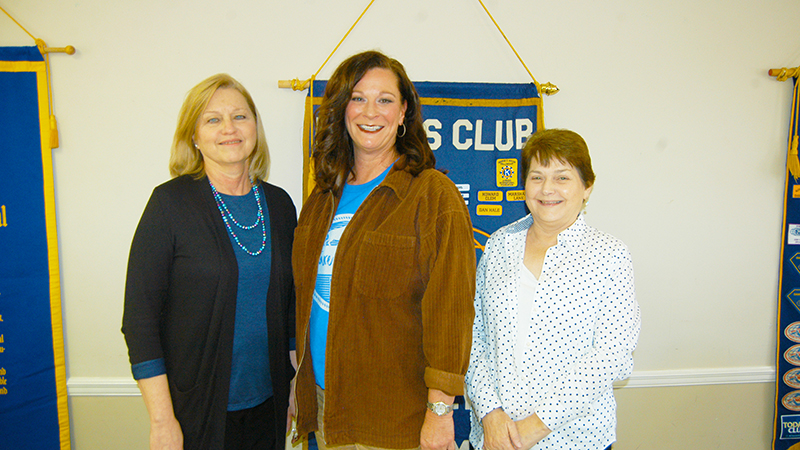 Kiwanis program: Dr. Kelli Hodge (at center) talked about something that’s not that well known in the local area — the Southern Union Foundation — at Wednesday’s noon-hour meeting of the Kiwanis Club of Valley. At left is Sharon Weldon, program chair, and at right is Debbie Yates, club president. Photo by Wayne Clark.

VALLEY — A school that has touched many lives in the East Central Alabama Region is having a centennial in 2022. What’s now known as Southern Union State Community College originated as Bethlehem College in Wadley, Alabama 100 years ago this year. It was chartered on June 2, 1922, by the Southern Christian Convention of the Congregational Christian Churches. It began with 51 students in a single building on Sept. 13, 1923.

That small school is now in its 100th year. It has now expanded to three campuses and some 5,000 students.

Many families throughout East Central Alabama have been touched in some way by Southern Union in its first 100 years. Many have either taught there, went to school there or worked there.

Everyone in the area has heard of Southern Union, but how many people knew it had a foundation?

Dr. Kelli Hodge talked about that at Wednesday’s noon-hour meeting of the Kiwanis Club of Valley.

Hodge said that Southern Union had been a big part of her life since she was a little girl.

“My mom taught there for more than 30 years,” she said. “At one time or another, everyone in my family took classes there.”

She credits SUSCC instructor Dr. Karen Stone for having a big impact on her life.

“When I was in school there, she worked with me on goal setting and helping me see that I needed to follow through on my goals,” she said.

Hodge had earned a doctorate degree and was serving as the superintendent of the Chambers County School District when she learned about Southern Union’s foundation.

“I was asked to serve on its board of directors,” she said.

That circumstance illustrates the board’s biggest problem. It’s been there for decades and has helped thousands of students with their educations but has remained relatively little known.

“We want people to know that a Southern Union Foundation exists and is worthy of your support,” Hodge said.

The SUSCC Foundation is a 501(c)3 organization which assists, supports and fosters the educational and service programs and activities of Southern Union.

“The Foundation encourages gifts for purposes such as scholarships and other awards to further the educational mission of the college,” Hodge said. “A gift to the Southern Union Foundation provides much-needed scholarships for students, expands student opportunities and helps to improve campus life and facilities.”

The Foundation’s major goal for the Centennial Year is to raise $1 million dollars. It’s off to a good start in making that goal. By mid-January, it had already passed the one-quarter mark.

One way the foundation helps current students is what is known as the gap program. It’s for families who make too much money for their son or daughter to qualify for student loan assistance but can still have trouble with funding that education.

Hodge mentioned the example of a young woman she knew who was closing in on a nursing degree from Southern Union. Her parents had always paid for her education, but that became a problem when they both came down with Covid-19 and had to miss work.

“We were able to help her through her final semester,” Hodge said. “She’s now a nurse at EAMC in Opelika.”

The foundation sponsors fundraisers to help generate funds for scholarships. There was a successful golf tournament and Christmas market on the Wadley campus. Plans are underway for an outdoor alumni banquet.

“I would like for this to be an annual event,” Hodge said.

Some thoughtful individuals have left part of their estate to the Southern Union Foundation.

“There are lots of ways to get tax-deductible donations,” Hodge said. “You can defer capital gains by doing this.”

One mistake the board is trying to correct is to target their donation to their specific interest.

Another person the Southern Union Foundation helped is Susie Jackson, who is now a registered nurse at the Coosa Valley Medical Center in Sylacauga.

“Ever since she was a little girl Susie had wanted to be a nurse,” Hodge said. “She did well in school and started college at 17. She was on her way but had to drop out to take care of her ill mother. She married and had some kids before she resumed her college education.”

She then had another crisis that interrupted her education. Her husband, Jeff, had a motorcycle accident that hospitalized him for a full year and left them deeply in debt.

With some vital help from the foundation she did make it back to school to finish that nursing degree.

“The Southern Union Foundation is making a difference in people’s lives,” Hodge said. “We want it to be diversified and to fill in all kinds of gaps.”

People ask for all sorts of help.

“Some people just want some help with the gas that it takes to get to school and back,” Hodge said. “Others are in need of full, two-year scholarships.”

The biggest hurdle to overcome is for the Southern Union Foundation to become widely known throughout the East Central Alabama region.

“We need to take time to educate people about it,” Hodge said. “We will be celebrating the centennial with some kind of gala event. We would like for Southern Union to continue for hundreds of more years. Most people find out about the foundation when they apply for financial aid. We need to do a better job of getting information out there about what we are doing.”

“Southern Union made all the difference in the world to me,” Hodge said. “What I learned from Dr. Stone, I have used throughout my life. Southern Union changes lives. It really does. I am always encouraging high school graduates to go there before attending a four-year college.”