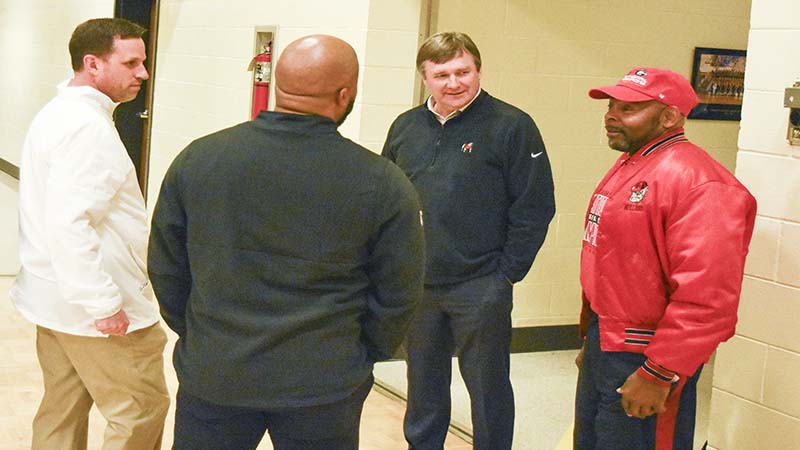 Kirby Smart stops to talk during a recruiting visit to Troup High School.

The recruiting landscape in college athletics has changed remarkably over the last few years, from the transfer portal, relaxed transfer rules and name, image and likeness (NIL) deals.

College coaches have scrambled to keep up, but so have high school coaches, who are tasked with helping their players find opportunities at the next level.

Lanett High School Head Coach Clifford Story said the transfer portal has made it more challenging to get his players in front of collegiate coaches. The creation of the portal has allowed college players to more easily transfer, meaning many teams are filling their rosters with experienced college athletes, rather than having to recruit as many high school athletes.

Troup High School Head Coach Tanner Glisson said the higher caliber athlete is not impacted as much as an athlete that requires development.

“The majority of your high school recruits are three-star, two stars, no rating, and they have to go in and get developed,” Glisson said. “So that’s where you’re really hurting, your five-stars are gonna be fine, they’re gonna find places, and somebody’s gonna jump on them because they [can] come in and play immediately. But you’re finding out with those lower talent level guys, they’re getting pushed in different directions, you know, they’re just dropping down the pecking order, so to speak.”

Both Glisson and Story say the relationships they have built with college coaches over the years has helped alleviate some of the problems, but Glisson fears for schools that do not have established relationships.

“I worry about the schools that may not have those connections,” Glisson says. “I think those are the ones that are going to suffer the most. It’s good for Troup, but at the end of the day we are trying to help all kids and that’s a big concern. If you don’t have those connections in the college ranks, you know, it might be hard to get your guys placed where they need to be placed.”

Story said although coaches are making visits, the visits are much different than in the past.

“I think they’re just coming through just because of the relationships that I’ve built with coaches in the past, and they just want to maintain the relationship that we have,” Story said. “The conversations are not what they used to be. They may call and say, ‘coach, I’m in the area, I’m going to come by and holler at you,’ where in the past, the conversation piece was different.”

This is not a problem that is isolated to one region of the country but a national trend that has the potential to boil over.

Donnie Zimmerman, the chief operating officer for National Preps, a national scouting service that functions as a player personnel department, agrees that the current state of the transfer portal has impacted high school recruiting.

“If you talk to any high school coach, you know, just kind of [about] the negative effect that he’s had on their kid, I think, every one of them will say it has severely impacted opportunities, number of scholarships, level play for kids being able to matriculate and play for the following four years,” Zimmerman says.

“We get in the portal, and you got to find that certain kid that maybe hadn’t been on a scholarship at all at a school but looking for an opportunity to play,” Chambers said. “We try to recruit high school. and we try to grow the kids up. We don’t give any athletic scholarships at Division III. It’s all academic money.”

What is the transfer portal?

The transfer portal is an online list of students that have notified their NCAA school of their intent to transfer. Once in the portal, the student can be seen by other NCAA coaches and be contacted without needing permission from the current school.

Changes that have impacted the portal numbers

In a June 3, 2018 press release, the NCAA eliminated the permission-to-contact process, creating what is commonly known as the transfer portal.

The previous transfer rule, which required student-athletes to get permission from their current school to contact another school before they can receive a scholarship after transfer, was intended to discourage coaches from recruiting student-athletes from other Division I schools,” a press release at the time said. “The rule change ends the controversial practice in which some coaches or administrators would prevent students from having contact with specific schools. Conferences, however, still can make rules that are more restrictive than the national rule.”

On April 28, 2021, the NCAA Division I Council made a significant change to the transfer rule, allowing athletes in all sports to transfer once without sitting out a year in the new program.

This change brought what is commonly referred to as the transfer portal to life.

Before the rule change, any athlete wishing to transfer to a new school was required to sit a year or file a waiver to be granted immediate eligibility.

Three years after its implementation, the NCAA released another significant change to the portal by giving all Division I student-athletes a one-time opportunity to transfer and compete immediately.

“Allowing student-athletes a one-time opportunity to transfer and compete immediately provides a uniform, equitable and understandable approach that benefits all student-athletes,” said Council vice-chair Jon Steinbrecher, who chairs the Working Group on Transfers and is commissioner of the Mid-American Conference. “The decision is consistent with Division I’s goal of modernizing its rules to prioritize student-athlete opportunity and choice.”

Why do athletes enter the portal?

Whether it be homesickness, atmosphere, coaching relationships, lack of playing time, or more recently and a quieter reason, Name, Image, and Likeness (NIL) opportunities, there are many reasons why student-athletes decide to transfer from one university to another.

In June 2021, the NCAA Division I Board of Directors adopted an interim name, image, and likeness policy allowing college athletes to have the opportunity to benefit from their name image and likeness that began July 1, 2021.

“This is an important day for college athletes since they all are now able to take advantage of name, image, and likeness opportunities,” NCAA President Mark Emmert said in a June 30 press release. “With the variety of state laws adopted across the country, we will continue to work with Congress to develop a solution that will provide clarity on a national level. The current environment — both legal and legislative — prevents us from providing a more permanent solution and the level of detail student-athletes deserve.”

This has been a driving force for some athletes to leverage their current value and earn more money while playing their sport.

No one has come right out and said they are in the transfer portal to get NIL deals, but one could assume these conversations are happening.

Todd Berry, executive director of the American Football College Coaches Association, told SI.com in a Jan. 3 report that this was an anticipated problem.

“We knew this was going to be a problem. This is a complete mess,” Berry said.

How to solve the problem

There is no way to tell what the future holds for the transfer portal or how much of an impact it will have on high school athletics, but Zimmerman thinks it will all fall into place at some point.

“I think it’s gonna shake itself out,” Zimmerman said. “I mean, honestly, I feel between the portal, you know, the NIL deals, I think all this got so far ahead of the NCAA, and they weren’t ready for it, honestly. I think they’ve got to come up with some type of rules, parameters. Right now, there’s no recruiting calendar for the portal kids.”

Unlike signing a National Letter of Intent, there is no way of tying an athlete to a school until they show up on campus.

“I was just talking to one of my FCS clients who has two kids committed to him and his comment to me was, until we get this kid on campus, there’s nothing tied to the school, there’s nothing bound.”

Having a calendar and establishing a deadline to enter the transfer portal is just one way of relieving the strain and trickle-down effect it is having.

“I would like to see the NCAA expand their scholarship limit,” Glisson said. “Instead of saying, you know, a school can sign 25, you know, maybe we go to 30-35 and expand our rosters, maybe get it from 85 to 100. And that gives you some wiggle room to add some more kids and take care of the problem that we’re talking about now.”