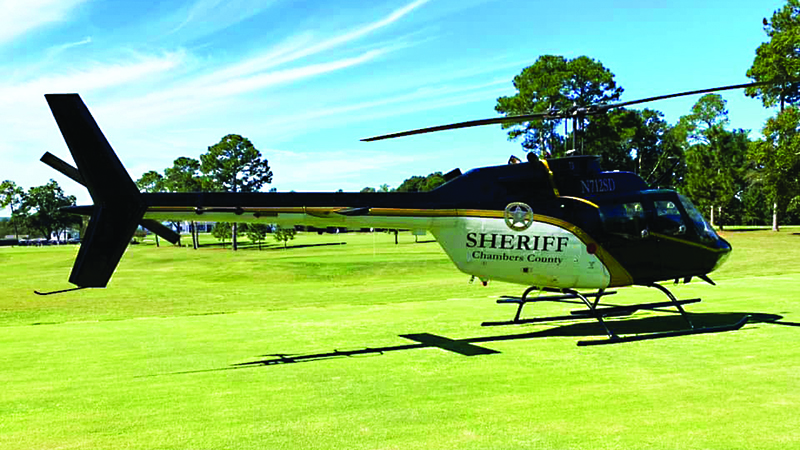 Eye in the sky: The Chambers County Sheriff’s Office Aviation Unit began in 2012 and has been able to assist in critical calls from law enforcement. Photo contributed.

VALLEY — Chief Deputy Richard Carter was the guest speaker at Wednesday’s noon hour meeting of the Kiwanis Club of Valley and talked about CCSO’s Aviation Unit.

A licensed pilot, Carter discussed how the county began an aviation program in 2012. An Auburn University student who was flying home alone to Tennessee in a private plane was missing for several days. This led to an aerial search over Chambers County. Plane wreckage was later found near Mount Cheaha. Sadly, the young man was killed in the crash.

“We thought about getting into aviation after that,” Carter said. “Etowah County called us and invited us to fly down their plane and use it for several days. We used it in several searches.”

With that plane, the Chambers County Sheriff’s Office had an aviation program underway.

In 2018, Sheriff Lockhart got a call from the Chilton County Sheriff’s Office telling him that they had two helicopters and an airplane for sale.

Carter and the sheriff drove to Clanton and looked over the helicopters. They liked what they saw. When they started talking price, the Chilton County Sheriff told them he would give it to them if they would take it.

“I was tickled to death like a young girl,” Carter said. “They flew it into the Lanett airport for us.”

The sheriff’s office sold its plane for $23,000 and have since had a military surplus helicopter for its aviation program. “It has been a great tool for us,” Carter said. “Not long ago, we received a call from the LaFayette Police Department asking us to help them in a search for an elderly woman who had wandered away from home. She was barefooted and was lost in the woods. We were able to find her, but she had died. A ground search may have lasted a lot longer.”

Carter said he knows that the sheriff’s office having a helicopter has its critics. “Some people think of it as a toy, but we know it is a great tool,” he said. “Our aviation program helps with what we do.”

A retired law enforcement officer from Oklahoma, Lynn Winter is a reserve pilot for the sheriff’s office. “He does a lot of flying for us,” he said. “We will continue with this program. We will be putting $280,000 in new equipment into it that won’t cost the taxpayers anything.”

The aviation program is funded by forfeitures and proceeds from the sheriff’s rodeos.