Cat has special place in the hearts of Hogansville Library patrons 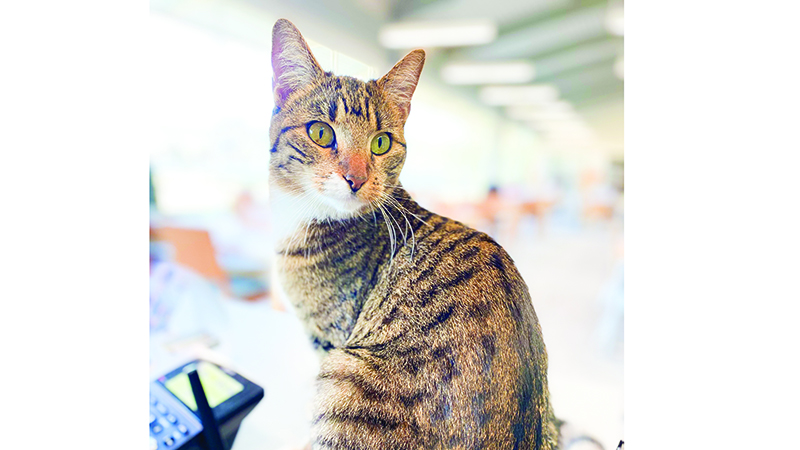 Purrfectly welcomed: Skippy the cat has been a part-time resident at the Hogansville Library for over half a year now, and library patrons and staff can’t get enough of her. Photo contributed.

HOGANSVILLE— Nowadays, it is not uncommon for patrons of the Hogansville Library to see a lanky, brown striped tabby cat roaming the shelves in the library’s lobby or catching a few rays of sun on one of the tables by the window.

The cat, whom library staff enduringly call Skippy, acts as the library’s feline mascot who balances her days roaming the nearby neighborhoods and library.

“I started noticing a cat under my car, and she would hang out [beside the building],” Knight, an avid animal lover, recalled. “We started feeding her outside.”

Eventually, she worked her way inside when the back door of the library was propped open, said Rebecca Keller, the library’s community engagement librarian. She and other library staff members grew fond of the cat’s calm demeanor and welcomed her stay.

Knight said that they asked “forgiveness rather than forgiveness” when it came to asking the library’s director, Keith Schuermann, for his blessing to allow Skippy to stay.

“Any opportunity for the public to be engaged in the library is wonderful,” Schuermann said. “Rebecca and her team have increased the profile on performance of the library tenfold, and I personally appreciate that. Anything that gets attention on what we do as a library is a job well done.”

Due to the area’s issues with stray cats and overpopulation, Knight and Keller decided to take Skippy to Newnan to have her spayed. During the appointment, they discovered she’d already been operated on.

“It turned out she belonged to someone [nearby],” Knight said. “She and another cat had been adopted from the pound to be pest control, which she’s very good at. This person was told she was an inside cat, but she does not like to stay inside very much.”

Knight said Skippy’s owner expressed no problem with Skippy’s roaming and she and the staff welcomed her as a part-time resident. In exchange for food and attention, put her pest control skills to work and began eliminating rodent and bug issues the library had been experiencing, Knight noted. The library staff named Skippy after Skippyjon Jones, a children’s picture book series by author Judith Byron Schachner. Keller said Skippy’s sibling cat, Stacks, is also frequently in the library.

Skippy spent her days roaming in and out of the library, visiting patrons during events like book club and Dungeons and Dragons sessions. Knight said children especially are eager to see the feline whenever they come in for the library’s weekly storytime events or to return their books.

There was a brief period in late summer when it appeared Skippy had skipped out of her part-time home. She went missing for nearly a month in November, worrying staff and breaking the hearts of the library’s youngest patrons. Keller and Knight were told that an individual close by had picked her up.

“The number of children who would come in and ask, ‘Where’s Skippy?’ and having to tell them she’s not here, and we don’t know where she is was like telling kids there’s no Santa,” Keller said. “I saw kids cry. It was heartbreaking.”

However, Skippy returned to the library the Sunday after Thanksgiving unfazed and returned to her normal routine. Skippy’s now allowed to go back and forth as she pleases and schedules her time between the library and other stops in the community. When Skippy’s had enough of the public for one day, she sometimes resides on Knight’s desk where she occasionally has access to a snack, plenty of sunshine and plenty of tight spaces to crawl into. Knight, Keller and a few patrons foot the bill for Skippy’s food and other needs, making her stay at the library all the more comfortable.