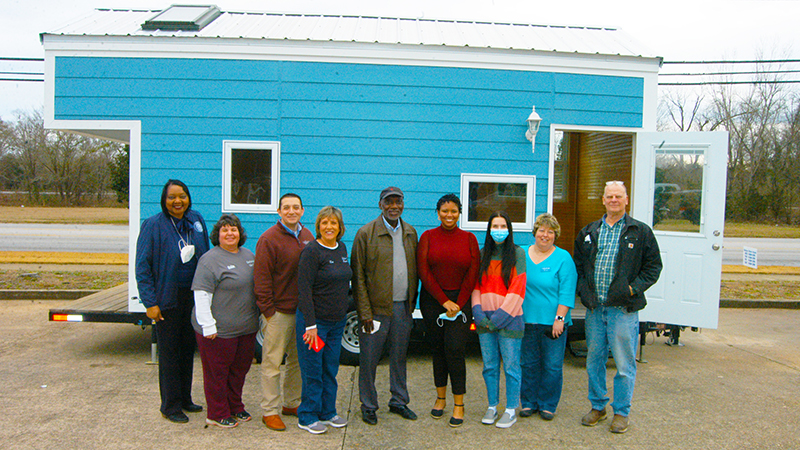 LANETT — A small house built by students from Auburn University’s Building Science Department was transported to Lanett on Wednesday. It’s presently in front of the Chattahoochee Fuller Center’s ReUse Store on Highway 29 and will soon be relocated to a lot in the Plant City community to be a transitional home for a single mom and her three-year-old daughter.

It’s a first step in a joint venture between the CFCP and the Chambers County Circle of Care Center for Families. The Fuller Center will acquire land, place a transitional home there and the Circle of Care will place an individual or individuals there who are turning their lives around. They will live in the tiny house for a few weeks, or a few months, up until they can find a permanent home to relocate to.

Circle of Care Director Jonathan Herston and CFCP Director Kim Roberts have been talking about doing something like this for several years.

When the CFCP built new homes in Beauregard following the 2019 tornado, Roberts and Assistant Director Robin Pierre made all kinds of new connections to Lee County. One of them was with Auburn’s Building Science Department. Students enrolled in the program design and build small houses like the one that arrived in Lanett on Wednesday. The houses are only about 300 square feet in size but are brand new with all the modern conveniences.

“I am so excited about this,” Roberts said. “We are getting a $50,000 house we can locate in the local area to provide a decent home for someone who is in transition. We are all about bettering our citizens, and we are so pleased to have an opportunity to do something like this.”

“It’s a first step in doing something that needs to be done,” Herston said. “We will have a second house coming at a later date. We will be working with the individuals who will be placed in these homes and helping them transition into a full-sized home at some point.”

“This tiny house is as cute as it can be,” Roberts said. “It has heating and air, a kitchen area, a bathroom, a bed in the loft area and room for some furniture we will be bringing in. We will have a couch, a futon and a TV set going in.”

Lanett Mayor Jamie Heard and West Point Mayor Steve Tramell were among the first to walk through the tiny house shortly after it was set up in front of the ReUse Store.

“We thought that having the two mayors here would be a good way to christen it,” Roberts said.

“We have been praying for several years now to have some kind of transitional shelter for people until they could find something permanent,” Herston said. “When they do relocate into a larger home, the tiny house can be used for someone else in transition. We want to thank the Fuller Center for being on the front end of getting the land and the house. With that in place, we can work with the family living there. They will be in a safe, secure place before moving on to something else.”

“It just doesn’t get any better than to have two nonprofits working together to do something like this,” Roberts said. “We can get land and have houses put there. The Circle can work with the families who are living there. We are working together to change lives for the better. I want to thank the two mayors for being here today. This area is about to grow and blossom into something special.”