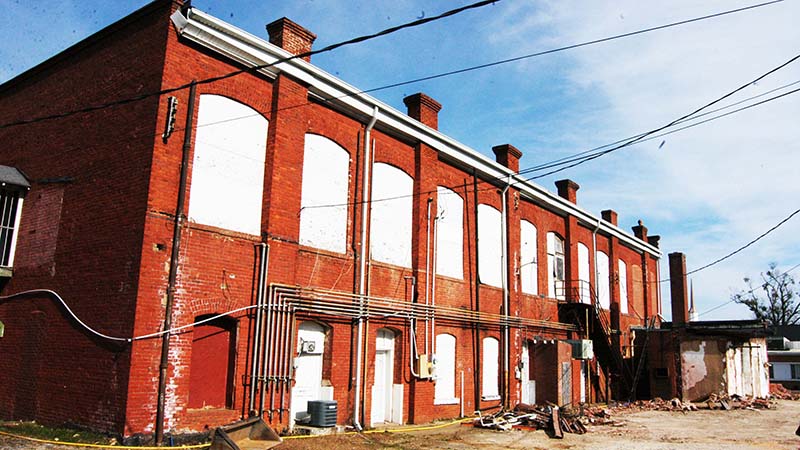 Renovations: Work has been underway recently at the historic two-story building in downtown Lanett. A smaller structure on the backside that had partially collapsed is being removed, and a new water line will be going in to service the building. Owner Carmen Davis has said she’s like to see the Fraternal Hall and Stores Building return to its former glory. Photo by Wayne Clark.

LANETT — The historic Fraternal Hall and Stores Building in downtown Lanett may be getting some new businesses. The building’s owner, Carmen Davis, told The Valley Times-News over the weekend that the City of Lanett will be installing a new water line to the building and will tear down and remove a smaller collapsed building behind the two-story brick building that faces First Street.

Davis said that two restaurants would be located there soon and that she was planning on making a progress report on her plans for the building to the city council.

She said she was pleased that the next phase of the city’s streetscape project would be going along First Street from Highway 29 to South 8th Avenue.

Davis commended Mayor Jamie Heard in being proactive in working with her to bring new life to what’s thought to be the oldest commercial building in the city.

The Fraternal Hall and Stores Building was constructed in 1906 and was commonly called the Business Block in its early years. It’s part of the Valley area’s textile heritage that the West Point Manufacturing Company provided their workers with all the necessities of life. In addition to a steady job, mill workers had a nearby textile village they could live in. It was within easy walking distance of the mill where they worked. The company also built schools, churches, recreation facilities and a general store. WPMC built Davis’ two-story building as a general store for Lanett. A two-story brick building in Langdale and the Johnson-Howell Building across from Fairfax Elementary School are other local buildings built as general stores.

One hundred years ago, in 1922, Lanett’s Business Block was home to Swint’s Pharmacy, the C.E. DeLoach Dry Goods store, the Lanett Post Office and the Chambers County Creamery.

The top floor was a meeting hall for the local masonic lodge and other civic organizations. Also located there was a The Chattahoochee Valley Times.

An indoor swimming pool was across the street, where the Lanett City Schools administration building is located today.

Heard said an underground water pipe leading to the building had burst several years ago. An above-ground pipe has been getting water to the building as a temporary measure. He said the pipe would be replaced and that water would be brought into the facility permanently. He added that the smaller brick building out back had partially collapsed.